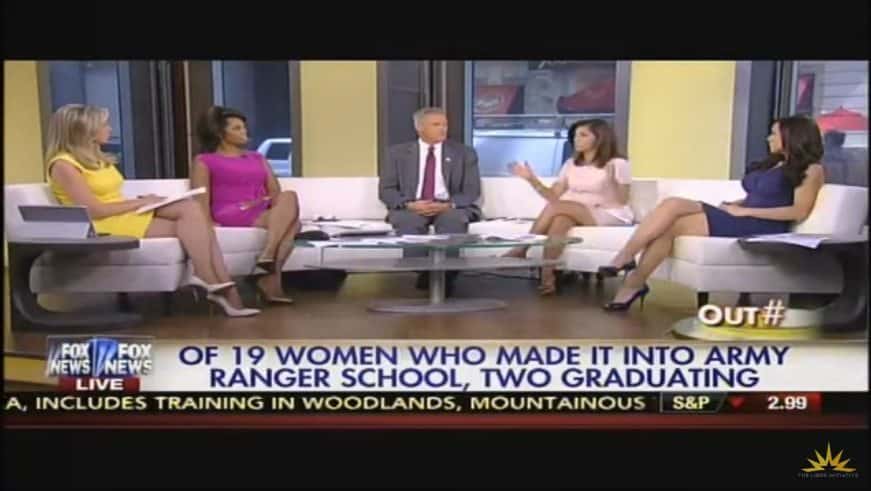 VA Secretary contender and Fox employee Scott Brown was named in a sexual harassment lawsuit for allegedly groping a female co-worker in a sexual advance.

Alleged sexual harassment victim Andrea Tantaros has filed a lawsuit against Fox News for firing her after complaining about numerous instances of sexual harassment. She is now suing for $49 million because she believes her termination was the product of retaliation.

In the complaint, her allegations named numerous high-profile co-workers and executives including Roger Ailes and Scott Brown for their participation in the now infamous Fox News “Playboy Mansion-like cult.”

In the complaint, Brown allegedly snuck up behind Tantaros to grope her in an unwanted sexual advance where he wrapped his hands around her “lower waist.” She previously rejected his request to go to a nightclub following an earlier interview.

Let me say this a different way and be very specific.

Scott Brown, possibly the next VA Secretary and a married man of 30 years with two college-aged daughters, crept up behind a young woman other than his wife, and groped the front of that woman’s “lower waist,” the area above her vagina.

This alleged sexual harassment, which apparently includes this assault allegation, amounts to disgusting and creepy behavior toward a female co-worker.

If true, it is certainly not what veterans need, especially those veterans struggling with military sexual trauma or harassment from a superior.

Brown denied the allegations publicly, citing his post-allegation Fox News promotion as evidence of no groping:

“This allegedly happened a year ago. Since then I’ve not only signed a new contract [with Fox], got a raise, I’m on almost every day… I had [Fox executive] Bill Shine call my house yesterday and say, ‘Listen, you’re one of our best employees.’”

Does this sound familiar? VA promoting bad managers linked to fraudulent behavior? Does the fact of the promotion mean no wrongdoing occurred?

Apparently, it does at Fox News and the Department of Veterans Affairs.

Regardless of the truth surrounding the allegations, if selected for VA Secretary, Brown would have to deal with the lawsuit while also fixing the systemic deficiencies within the most corrupt agency in history.

Is Brown up for the challenge or is this a recipe for disaster?

Despite this hurdle, Scott Brown asserts he is “the best person” for the job at the helm of the Department of Veterans Affairs responsible for its $160 billion annual budget.

How Is Trump’s Team Missing This?

How is it that I can piece together an obvious red flag within a few minutes of digging but Trump’s team and the mainstream media is completely silent about the sexual harassment lawsuit? Where are Trump’s advisors in flagging this candidate as unfit?

If you are giving Brown the benefit of the doubt, I plan to publish more about his anti-LBGT positions including against LBGT servicemembers.

In the video above, if you watch the entire footage, you can see Brown insinuate that gays openly serving in the military would harm the mission.

I plan to cover more on this tomorrow.

According to Tantaros’ legal complaint, the incidents implicating Brown occurred after an interview on her Fox News show Outnumbered in August 2015.

After the interview, married Scott Brown hit on the Fox host when he suggested the two go to a nightclub together, saying she “would be fun to go to a nightclub with.” Brown is married to journalist Gail Duff, and the two have two college-aged daughters together.

Tantaros reportedly rejected the former Senator’s advances onset. But that did not conclude the matter.

Later, Brown allegedly committed an assault while Tantaros attempted to buy her own lunch in the Fox cafeteria. The complaint states Brown snuck up behind Tantaros to grope the front of her “lower waist” while she had her back turned.

According to the complaint:

“After the show was over, Brown snuck up behind Tantaros while she was purchasing lunch and put his hands on her lower waist. She immediately pulled back, telling Brown to ‘stop.’”

A Clintonian Denial By Scott Brown

“There were never any circumstances of any kind whatsoever in which I had any interaction with her or any other employee at Fox, outside the studio,” Brown said (emphasis added).

“If there was ever a chance encounter at a restaurant, or public place, all interactions were professional and cordial. All interactions and contacts were in the studio in NYC and always in full view of all staff, personnel and talent,” he added.

“In the 3 years I have been working there, I treat all people there the same, whether they be male or female. If I am asked to make a witness statement of some sort, I look forward to that opportunity.”

He clearly borrowed one from the Clinton playbook on denials of extra-marital affairs.

Almost 20 years ago, former President Bill Clinton denied allegations he had sexual relations with subordinate Monica Lewinski. Later, Clinton admitted to the allegations but asserted he confused a common definition of “sexual relations” with his own, more limited definition that conveniently did not include the acts he perpetrated with Lewinski.

Here, Brown asserts he never behaved in an inappropriate manner “outside the studio.” But he goes on to indicate all his interactions with Tantaros were inside the studio.

Why would he specifically exclude all his interactions when denying the assault?

I have received insider reports that the grope most certainly occurred and that it occurred in front of witnesses inside the Fox studio. I guess that means Brown is being 75% truthful.

Why Is The Press Silent On This?

Based on the above allegations, would Scott Brown be the right person for the job as VA Secretary given the overt culture of abuse and harassment the agency struggles with on a regular basis?

Or maybe Scott Brown would fit right in as head of VA?

Either way, given the “grab them by the [email protected]” fiasco, I am wondering why Trump’s advisors are taking Brown’s consideration this far? And where is the press on this one?

Are they trying to set Trump up for embarrassment during the confirmation hearings? It is certainly worth considering.

Compounding this, most veterans surveyed prefer Rep. Jeff Miller, Chairman of the House Committee on Veterans Affairs, over former Sen. Scott Brown by over 80 percent (presently the interim survey shows veterans’ preference at 88%).

For every 100 veterans surveyed, less than 10 prefer Brown over Miller.

Even if Brown is innocent, this seems like a bad issue that has lots of room for horrific publicity for both the Department of Veterans Affairs and the Trump Presidency.

Maybe it is time to consider other options?