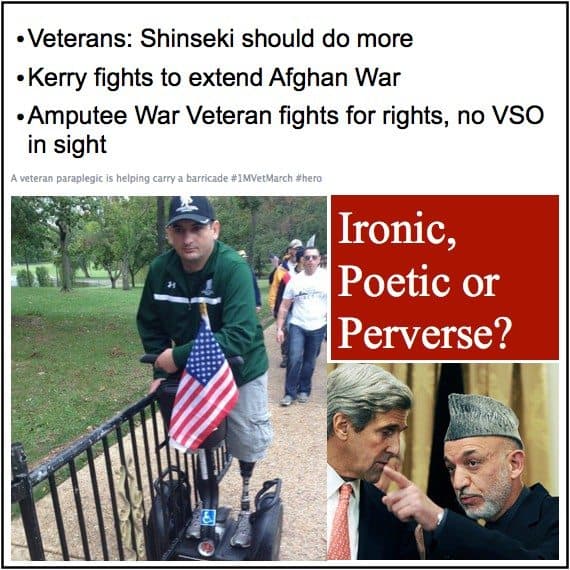 Congress is mired in conflict over the shutdown. John Kerry is fighting to extend our War in Afghanistan. Vets are divided on the Million Vets March. What is going on?

Hi and welcome to another edition of the Monday Morning Quarterback for veterans. This is where I let my hair down and tell it like it is. Here’s the drill. I pour myself some coffee in the morning and create a write-up of the issues my readers have highlighted. I then post it here.

Here is what we are going to go over today:

Last Wednesday, it surfaced that Secretary Shinseki has not met with Senate Majority Leader Harry Reid (D-NV) to discuss the Senate’s failure let VA funding be debated on the floor.

In a survey I did across social media, 99% of veterans said the Secretary should do more. Specifically, he should talk with Senate Majority Leader Harry Reid about VA’s lack of funding to pay veterans benefits.

During the hearing, Shinseki was asked if he has spoken with Senate leadership (Harry Reid) about funding VA. He danced around the answer for a minute, highlighting that “Congress” needs to do something. Eventually, he concluded by saying he has not spoken with Senator Reid.

In response, House Republicans held Shinseki’s feet to the fire by pointing out that the House had in fact passed numerous bills that would fund VA fully through 2014.

Over four months earlier, the House has unanimously voted to support such legislation. However, Senator Reid has refused to bring the bill to the floor for debate.

Procedurally, the Senate Leader sets the calendar for what the Senate will deliberate over. Here, Senator Reid has refused to let the VA funding bill see the light of day.

After the hearing, I decided to research whether or not it was appropriate for a Cabinet Level Agency Head to address Congress directly.

I did not have to look any further than 2008. That is when Treasury Secretary Henry Paulson lobbied both the House and Senate to pass TARP to bail out banks.

Some of you may remember that Paulson marched across Capitol Hill to gain support from the House and the Senate to give him a blank check. He called the blank check a “bazooka” that he was going to use to calm the nerves of investors.

Since we did it for banks, I’m unclear as to why Shinseki will not rise to the occasion to broker a deal for veterans in the same manner as Paulson.

If Paulson got a blank check for banks, can’t Shinseki get veterans a specific check amount – an amount that does not cost over $700 billion dollars?

Any ideas? I’m working on a side by side comparison video w/ some documentary footage so you can compare the testimony of Paulson with Shinseki’s.

Senator Harry Reid has made a budget offer to Senator Mitch McConnell. The deal would keep the government open until mid-December.

This kind of a deal freaks me out for one reason. Congress goes home around that time and does not take up any new issues until sometime into the new year.

A couple years ago, Congress left the first responders of 9/11 in NY without a vote on mandatory health care coverage. As some of you remember, many of those individuals were terminally ill due to exposures of chemicals during the crisis. They could not get health care.

Instead of covering the care, our government tried to shirk its responsibilities by avoiding a vote until the new year.

Veterans do not need to have a crisis, like a lack of benefit payments, extend into wintertime. At that point, many veterans will have a new worry: How do I heat my house and food?

This would extend the budget issue into the dead of winter season. Would you trust a bunch of adults behaving like children to make the right decisions around Christmas?

Secretary of State John Kerry, on behalf of the White House, met with Afghanistan President Hamid Karzai to renegotiate the US draw down. During the unscheduled meeting last week, the two politicians haggled over particulars but did not close a deal.

The meeting in Kabul was unscheduled and is the result of stalled negotiations about how US will draw down its troops in 2014.

Without an agreement, US troops will need to follow President Obama’s promised timeline for withdrawal – all troops in 2014. Now, the White House appears to want to go back on its promise to end the war.

Reuters coverage of the negotiation did not comment on the number of troops US wants to leave behind, just that there is disagreement on this and the issue of soldier immunity. However, according to Al Jazeera, the US wants to leave 20% of its fighting force in the country, around 10,000 troops.

The stated purpose of the continued occupation is to conduct counterterrorism and counter insurgency operations against insurgents from Pakistan.

The Million Vets March: Is “nonprofit” status silencing our VSO’s?

There is a 700 pound elephant in the room about nonprofits and advocacy.

Nonprofits can be advocates to a certain point, but they generally avoid speaking out on political issues. Generally, the reason is that the IRS says they cannot due to their nonprofit status. If they get too political, they lose the status and get penalized.

Unfortunately, it is the politics that leaves groups of Americans, like veterans, without a loud enough voice. All the while, lobbying firms for large corporations – corporations that are not limited to staying out of politics – are able to get practically as political as they want.

In the veteran arena, it sounds like 501c nonprofit status prevents many VSO’s from being involved when politicians play football with America’s heroes. Many of these VSO’s are 501c3, 501c4, and 501c19 nonprofit corporations.

The Million Vets March is a recent casualty of this large elephant.

Yesterday, rather than supporting veterans who took to the streets to protest, VSO’s chose to stand down, at least for that rally.

When asked on DAV’s Facebook group, Joe Chenelly, Assistant National Director of Communication for Disabled American Veterans (DAV) was kind enough to help answer our questions on the event. He stated the following:

“We do not know nearly enough about this event to take part as an organization. There is no clear indication of who is running it or even its true goal. As you know, DAV is legally obligated to remain non-partisan, and it is unclear whether this event is partisan or not.”

Being pragmatic and cautious is always a good thing. However, utilizing one’s 501c nonprofit status as the justification raised further questions.

Here, DAV is a 501c4, not a 501c3, and can engage in political endeavors that could be perceived as partisan.

I pressed the issue by writing the following. “Only 501c3’s are strictly prohibited from activities that are partisan. [Organizations like DAV] can take stands that are considered partisan, so long as the position supports the social welfare of the group represented – i.e. taking down the War Memorial Blockade.”

To this, Mr. Chenelly responded, “… DAV’s Congressional charter and National Constitution & Bylaws stipulate the organization cannot support or oppose any elected or appointed public official.” I’m not familiar with DAV’s charter, but, if true, it makes sense that DAV would be worried about this status due to the penalties that could result if DAV deviates.

It is just this concern that silences great organizations like DAV from being advocates across the board. Unfortunately, as illustrated above, VSO’s that may have participated in the event chose to abstain. Instead, many of the VSO leaders have opted to send letters to Congress and the White House, chastising them for their childish antics.

According to Army Times, to compensate, VSO’s have opted for a VSO sponsored veterans rally on October 15. The goal will be to support compromise on a budget and to hold a press conference.

While this is nice, I believe VSO’s should more publicly support organic movements started by their veterans. My critique here is that it appears that most VSO’s shy away from movements that start outside of a VSO Board room for fear that it might be deemed “partisan.” Sadly, many veterans will be unable to participate tomorrow, since the VSO event is scheduled during work hours (10am) on a Tuesday.

That basically means that only those working as professional veterans advocates and those who are unemployed will be able to attend. I guess the press will be there, and the VSO’s will not have to share the lime-light with Conservatives who did attend the march two days earlier.

My critique on the VSO partisan fear

Instead of VSO’s taking the lead to help organize the event, which was initially nonpartisan, Conservative groups were allowed to co-opt the effort (there were some “tea party” esq speakers, but that was just for the photo op at the beginning from what I’ve been told). 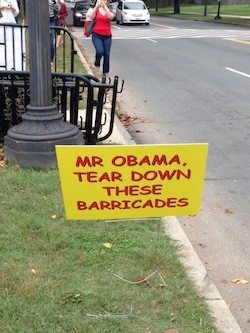 In the end, the Million Vets March became somewhat political, but for the most part, it has been classified by those who did attend as being merely pro-America, pro-Veteran. People waived the flag and sang patriotic songs. They took down the barricades. They had some signs up.

The scene on social media was a bit different. Again, VSO’s claimed the event was partisan, and for that reason they did not want to participate. The credibility of the message to those who did not attend become somewhat neutered as a result of the claims from VSO’s on partisanship. By allowing that to happen, the ultimate massage was undermined.

The message was that veterans deserve better, and that any politician who stands in the way of honoring veterans will experience a public and peaceful backlash. The politicians could be Democrats or Republicans – if you stand against vets, you lose.

Due to the lack of support by VSO’s through no participation or support, it divided veterans about participation in the Million Vets March. This division can be evidenced across social media forums talking about the march. Those who went said it was a success. Those who critiqued its Conservative participants and the overall march itself.

This lack of solidarity eroded the event’s credibility despite it being a nonpartisan event to begin with. And, without solidarity, veterans voices will not have as much of an impact.

The division that had formed over the rally personally troubles me. On a bigger level, it seems like nonprofits result in gagging many of the advocacy institutions our country has come to rely on.

For example, churches across the country refuse to speak out about politics because they would lose their 501c status. Without the status, donors would not be able to deduct donations from their annual taxes. And, if the organization oversteps, the leaders of the organization would receive severe penalties.

In a brilliant TEDTalk, Anecdote to Apathy, speaker Dave Meslin said the following about how big bureaucracies obstruct citizen involvement:

Maybe the issue here is that VSO’s are too entrenched and too bureaucratic to respond with the speed veterans issues really require.

Or maybe, 501c nonprofit status holds back veteran organizations and other advocacy groups like them from really being the advocacy voices our country needs.

After the event, Mr. Chenelly pointed out that DAV was glad it did not participated despite some valid points that were made by well-intended people. “There was very little control by the organizers, which was exactly what I feared and why larger organizations kept away. It was hijacked long ago.”

This could have been avoided if VSO’s wanted to help. Instead, they opted to hold their own event, initiated and organized by them when veterans by and large will be unable to attend.

Should VSO’s use 501c status if it keeps them from being involved?

Tell us your thoughts.