The Veterans Affairs Department would have to employ 4,000 more workers in order to scan billions of pages of paper benefit claims, William Bosanko, a top executive at the National Archives and Records Administration, told a hearing of the House Veterans Affairs Committee today.

NARA has performed sophisticated scanning operations for the department at five sites for the past two years under contracts valued at $9.7 million, Bosanko told lawmakers at the hearing. The system NARA developed for VA not only scans documents, but also has been taught to recognize and compile data from 170 different forms the Veterans Benefits Administration uses, he said. VA’s contracts with NARA expires next week.

VA holds records on millions of veterans dating as far back as World War II. Bosanko estimated the department would have to scan 60 million pieces of paper a month so that records could be used with the Veterans Benefits Management System — a feat that would require a staff of 4,000. He did not say how long the process could take. 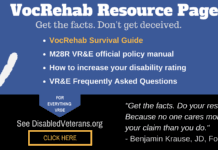 Top 4 Strategies When Your Voc Rehab Counselor Will Not Pay...