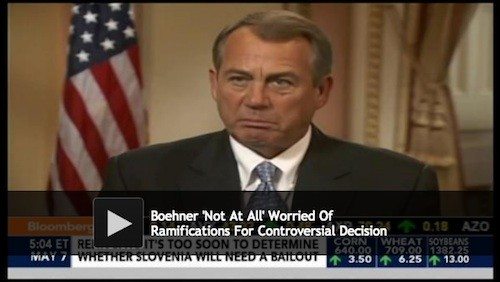 Rep. Boehner and fellow Republicans are rock solid on stiffing veterans and the troops in favor of China and similarly situated bondholders.

During a Bloomberg TV interview, the House Leader said the current Republican bill would push troops and veterans to the back of the bus if passed. The bill essentially sets payment priorities should the U.S. hit its debt ceiling at some point, putting China ahead of troops.

While prioritizing debt holders, the bill fails to recognize America’s greater debt to those who bore the risk of service before self – the debt to our troops and veterans. It further discounts the impact of failing to pay troops while securing our nation at home and abroad.

“Our goal here is to get ourselves on a sustainable path from a fiscal standpoint,” Boehner said. “I think doing a debt prioritization bill makes it clear to our bondholders that we’re going to meet our obligations.”

Veterans are used to America forgetting its obligations to them. For over 200 years, America has struggled to meet its obligation to veterans following every war. Once the muskets go back in the closet, politicians and bureaucrats soak up the remaining good will towards troops in the form of fraud, waste and abuse.

Now, the House majority is back to business as usual  Pay off the banks first; through in some tax cuts for the “job creators.” Those who sacrificed to keep the bankers safe, they get the table scraps.

“American families do not get to choose which bills to pay and which ones not to pay, and the United States Congress cannot either without putting the Nation into default for the first time in its history,” read the Statement of Administration Policy. “This bill would threaten the full faith and credit of the United States, cost American jobs, hurt businesses of all sizes, and do damage to the economy.”

Personally, I think this move by Boehner and fellow Republicans is a dick move.