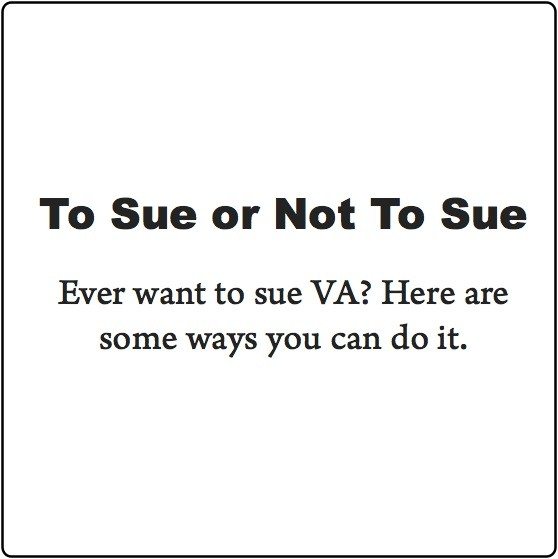 This is the topic of the day in many veteran circles these days in light of major problems veterans have faced. Veterans want justice, but is the answer merely to sue?

A fellow veteran advocate asked this question late last week, which certainly begs a question as to why more veterans do not sue VA directly. There is an answer.

If only the reality of that proposition was as simple as merely saying the one syllable word.

The short answer is that it costs a great deal of time and money to take down a bully as big as the Department of Veterans Affairs. I will give you the long answer below.

Hi and welcome to another edition of Monday Morning Quarterback for Veterans. Thanks for tuning in. I am your host, Benjamin Krause, creator of this website and the community around it.

For this edition of MMQB, I want to take a little time to explain why it is hard to file suit against a monster bully like VA despite all the crazy things the agency does that hurts veterans. I also want to get into ways some people can sue in this context.

This is not intended to be a legal note, but instead I wanted cover enough ground to give readers a solid appreciation for what they need to look into if they are considering a suit against VA.

Why not sue VA in a class action over bad policy?

Like I mentioned above, many veterans talk about suing VA for the problems they face in their individual claims, but within a class situation.

A class action basically means a few people get together with the same problem with the same agency and file suit in a federal district court somewhere. There are two issues potential litigants face when wanting to sue a large federal agency.

First, you will usually come up against the problem of “sovereign immunity.” This essentially means you cannot sue the federal government unless it allows you to do so because it is immune from liability under the law.

This idea stems from England and the common law we adopted. The federal government must consent to your lawsuit. There are exceptions that I will touch on below, but suffice it to say that generally, suing the federal government will not work in the same way a person can sue a private company or an individual.

Second, even if you can sue the federal government, bringing a class action lawsuit costs a lot of money. I have been told it costs around $250,000 to over $1 million depending on the complexity of the matter. Sometimes they cost even more than that.

I was with Veterans for Common Sense when we lost the final appeal in the 9th Circuit against the Department of Veterans Affairs back in 2012-13. That suit started in 2007. The goal of that suit was to merely change policy versus monetary damages. The suit was brought under the Administrative Procedure Act, which allowed us to sue but not for monetary damages.

Even though we had a compelling argument, the court in the 9th District was unable to conclude it could even decide the case on the merits for jurisdictional issues. Basically, the court did not believe it could tell VA what to do because VA does not fall under the court’s authority.

The lone dissenter, Judge Mary M. Schroeder, wrote about the apparent catch 22 veterans face when trying to bring major suits against VA, “To challenge delays in the system, you must bring a systemic claim and not just an individual claim. But if you bring a systemic claim, it has to be treated as an individual claim and you must suffer the delays in the system.” The result is that the veteran must stick it out in the VA claims adjudication process no matter how messed up the process is.

As stated above, the funding generally required is somewhere between $250k to $1 million in just resources for BIG law firms to handle a case pro bono. If a law firm were paid up front for the work, ie not pro bono, it would be extremely cost prohibitive.

On the subject of money, people tend to complain about lawyers not doing more pro bono work in this arena, and I used to be one of them until I also graduated law school with $200,000 in student loan debt, like other attorneys.

When an attorney is looking at $3,000 per month in student loan payments, trying cases pro bono becomes more of a luxury. For those of us not born with a silver spoon in our mouths, chasing matters of justice with no pay out at the end of the day is just not economically feasible. We all have to eat, just like everyone else.

Here is what this means. This means veterans wishing to seek justice will need to come up with creative ways to finance their lawsuit, in much the same way businesses seek creative ways to fund a start up. Perhaps starting a nonprofit for just this purpose and seeking funding through Kickstarter.com would suffice.

The link below is a good story about how the law does not interact well with veteran claims, and it highlights the lead attorney for our case back then. The law firm Morrison & Foerster LLP handled our case, and the team was led by Gordon Erspamer, who was a great advocate for veterans. He has since retired due to a spinal injury.

Check out Erspamer’s story: Standing up for Vets.

Any way you hash it, there must be a solution but it will require the hard work of all who plan to bring about change. No free rides for anyone, vets included.

Ways to sue VA that work

Despite the large policy suits that never seem to go anywhere, VA has been held accountable for privacy breaches and medical malpractice. Claims like these tend to work because the attorney is able to recoup costs through part of the plaintiff’s award.

An example of the opposite is how most traditional veteran service officers (VSO) manage disability claims for veterans. The VSO gets paid regardless of the outcome. Further, many VSO’s get so loaded up with claims that they cannot possibly manage them effectively. If a lawyer did that, she would get sued for legal malpractice.

Back to the point. Generally speaking, VA can be sued under the Federal Tort Claims Act (FTCA) for certain things that Congress agreed to allow suit for. You notice the trend here? The government must grant you permission to sue it. This is usually accomplished through passing legislation like FTCA.

In 2006, VA was sued over a major privacy breach that was the result of a stolen laptop where 26 million soldiers and veterans were exposed. While the lawsuit did not apparently end in a verdict against VA, the agency instead settled and agreed to pay over $20 million as a result of their failure to safeguard the data.

Currently, VA has had repeated problems with its eBenefits.gov system kicking out private information about veterans to random visitors. The VA OIG also said last summer that VA continues to fall well short in the arena of privacy, so one can count on seeing more suits in this area.

Medical malpractice is another area where veterans are seeing some success in achieving justice. The most current numbers put Veterans Affairs malpractice payout at $91.7 million in 2012 and rising.

In one instance, a veteran initially treated at VA for a teeth extraction ended up becoming permanently incapacitated as a result of VA malpractice. The court awarded veteran Christopher Ellison $17.5 million in that instance.

Since 2001, taxpayers have paid over $700 million to resolve malpractice suits against VA alone. That money comes from the US Treasury’s Judgment Fund. In my perfect world, we would be able to sue the bad actor VA employee directly and force them to pay out of pocket for their own screw up.

Work arounds regarding lawsuits could also include brining qui tam lawsuits against government contractors. I will touch on that in the next topic.

Contractor Northrop Grumman got caught potentially defrauding the US through a billing scheme by a whistleblower. If true, the whistleblower could get 15-25 percent of the award.

Here, that amount would be around $15 million. The whistleblower also gets attorney’s fees. Combined, this is no small amount of money in exchange for holding a contractor accountable.

This suit is brought under qui tam. Qui tam lawsuits are brought under an old area of law once almost forgotten but is now becoming a hotbed for current litigation under the False Claims Act.

This relates to the VA in a big way because government contractors are responsible for holding the monolithic agency together. Every year, VA pays over $100 billion of its budget to contractors for practically everything the agency relies on to function.

We hear countless headlines about projects to create mysterious electronic files projects that cost billions upon billions of dollars. Yet, every year we hear that those same projects magically never work out after spending around half of the budgeted amount.

When it comes to veterans benefits, many contractors have their fingers in the pie. McKinsey & Co is responsible for much of the current adjudication system ranging from the DBQ’s to the calculators claims reps use to decide how much your disability percentage will be. Numerous other contractors charge hundreds of thousands of dollars to manage web pages for VA. QTC Management performs countless examinations for Disability Compensation.

My guess is that there are so many contractors running around VA that the odds are in someone’s favor to be a whistleblower at some point. This could be an interesting way to hold both VA accountable and to meanwhile receive payment from government contractors possibly defrauding taxpayers.

By putting pressure on VA’s relationships through a lawsuit like a qui tam, it could result in VA tightening up its loose policies in areas like disability compensation examination, for example.

Tying it all together

Generally, it would be hard to sue VA to change policy. Generally, the APA or FTCA or even qui tam are the few ways we can get much accomplished. However, VA employees have a great deal of discretion and latitude that insulates them from lawsuits.

But, if you have a government contractor performing a medical service like a disability evaluation, and that same contractor screws up, you may be able to sue outside of FTCA and under state laws relating to physicians and the treatment a patient is supposed to receive. Perhaps we could even sue the bad actor directly.

My best guess right now is that any company performing disability compensation services for VA that run contrary to the local rules governing treatment could be at risk for suit.

Further, if those services are being billed out at inflated prices or for services not performed, a whistleblower could really bring the house of cards falling down.

Will that lucky whistleblower be you?

13 thoughts on “MMQB: Ever Wonder how to Sue the Department of Veterans Affairs?”