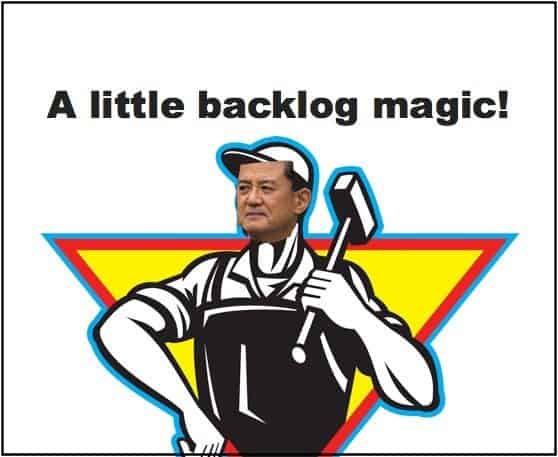 In an announcement reminiscent of our “victory” in Iraq some years ago, VA announced it has finally gained the upper hand against the backlog. Despite reports that VA merely moved claims from the backlog into the appeals pile by unfairly deciding claims, VA now claims its own victory.

Here is the press release that just came across my desk minutes ago:

WASHINGTON – One year after the backlog of pending disability compensation claims peaked at over 611,000 in March 2013, the Department of Veterans Affairs (VA) has reduced that number by approximately 44 percent to 344,000 claims – a reduction of more than 267,000 – while at the same time improving the accuracy of the decisions being made on Veterans’ disability claims.  Additionally, on average, Veterans are waiting 119 days less for a decision than they were at this time last year.

“No Veteran should have to wait to receive earned benefits.  Through a combination of transformation initiatives and the hard work of our employees, we are making significant progress toward our goal of eliminating the claims backlog in 2015,” said Secretary of Veterans Affairs Eric Shinseki. “We still have more work to do, and no one is more committed than our Veterans Benefits Administration employees, over half of whom are Veterans themselves.”

The current backlog, defined as claims pending more than 125 days, is at its lowest point since March 2011, when the backlog spiked in part because of the need to readjudicate 150,000 previously decided cases involving exposure to the Vietnam-era defoliant, Agent Orange.  The readjudication of these claims was mandated under the Nehmer court decision and followed the Secretary’s decision to add ischemic heart disease, certain leukemias, and Parkinson’s disease to the list of conditions presumed to be related to exposure to Agent Orange. During this same time period, VA also received and processed over 100,000 new claims for these three conditions from Vietnam Veterans and survivors newly eligible for VA benefits as a result of this decision.

“We knew taking care of this ‘unfinished business’ for Veterans of previous wars would initially drive up the number of claims in our system.  But it was the right thing to do,” said Secretary Shinseki.

Since establishing the goal in 2010 of processing all disability claims within 125 days at a 98-percent accuracy level, VA developed and is implementing a plan that transforms the decades-old, manual paper claim approach into a state-of-the-art electronic process that leverages digital data transfer and automated calculators to reduce processing time and input errors.

At the same time, the accuracy of rating decisions continues to improve. VA’s national “claim-level” accuracy rate, determined by dividing the total number of cases that are error-free by the total number of cases reviewed, is currently 91 percent – an eight-percentage-point improvement since 2011.  When measuring the accuracy of rating individual medical conditions inside each claim, the three-month accuracy level is 96.5 percent.  VA’s accuracy measures are statistically valid and the process has been independently verified by the Institute for Defense Analyses.

Regardless of the status of their compensation claims, Veterans who have served in combat since Nov. 11, 1998, are eligible for five years of free medical care from VA for any illness associated with their service.

Veterans can learn more about disability and other Veterans benefits on the joint Department of Defense/VA web portal eBenefits at www.ebenefits.va.gov.