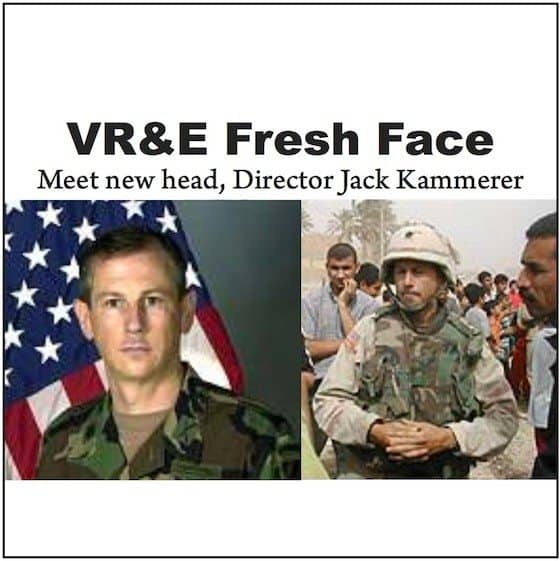 Former Army Lieutenant Colonel Jack Kammerer was recently selected as the new Director of VA Vocational Rehabilitation and Employment. This means he is in charge of the rehabilitation claims of disabled veterans across the country.

This perhaps indicates VA’s new focus on certain projects over the specific quality of the program over which Mr. Kammerer is now required to administer. Or, perhaps his selection will mark a “getting tough” period for both veterans and union employees.

A review of his background indicates he was a lifelong Army officer following graduation from West Point in 1984. Following the Army, he worked in the Pentagon and Capitol Hill prior to coming on board at VA as a Senior Advisor.

I ran a search for different media citations from or about Jack Kammerer to help us get some kind of impression of who he is as a leader. Perhaps there we can get an idea of the kind of policies he will push for as Director of Vocational Rehabilitation and Employment. There is not a lot out there about the man, but we at least have a good starting point with what is below.

Recently, Mr. Kammerer testified to Congress about future changes he will likely implement within Voc Rehab. Most expensive among these will be transitioning Voc Rehab’s files system from paper to electronic. He will also ensure the recommendations of a recent scathing report from GAO will be explored.

In 2012, Mr. Kammerer provided input on how Army and VA are collectively improving VA’s transition program:

The EBenefits site will play a significant role ensuring a warm handoff. The site sill soon send out reminders as users hit key milestones in their transition as to what things they should be doing at that point to prepare, said VA Senior Advisor to the Secretary Jack Kammerer.

In 2003, in the Army, Lt. Col. Jack Kammerer provided much fodder for media outlets during his command in Iraq. In the 3rd Infantry Division, Mr. Kammerer led the 3rd Battalion, 7th Regiment, with the 3-7 Battalion at the Baghdad Airport.

In one BBC report titled Iraqis reject US explanations, BBC reported on problems Jack Kammerer had in winning the hearts and minds of Iraqis:

Lieutenant Colonel Jack Kammerer is on a mission to “explain and offer help” to the people of Hai al-Muallimin, but it doesn’t seem to be going very well.

A few young Iraqi men and boys are gathered around his Bradley armoured vehicle, where a US Army lieutenant who speaks a few words of poor Arabic is causing some wry amusement.

But most residents are still too emotionally bruised to do anything except stare resentfully from a distance. Not that Colonel Kammerer is discouraged.

“After Saturday’s unfortunate event we were received here by an angry mob which chased us away… People seem less angry today,” he tells me.

Prior to Iraq, Mr. Kammerer served in Kosovo and Korea.

In high school at Grand Island, NY, he was known as Greg Kammerer. On Grand Island, he was involved in cross-country and a member of DeMolay, which is a youth group for the Masonic Lodge. Congressman John LaFalce provided Mr. Kammerer with the recommendation credited with his acceptance into West Point after graduation from high school.

LinkedIn has a brief summary of Mr. Kammerer’s experience and education.

Tufts University – The Fletcher School of Law and Diplomacy

What do you think about Mr. Kammerer’s qualifications? Let us know if you think he has what it will take to reform VA’s troubled benefits program.