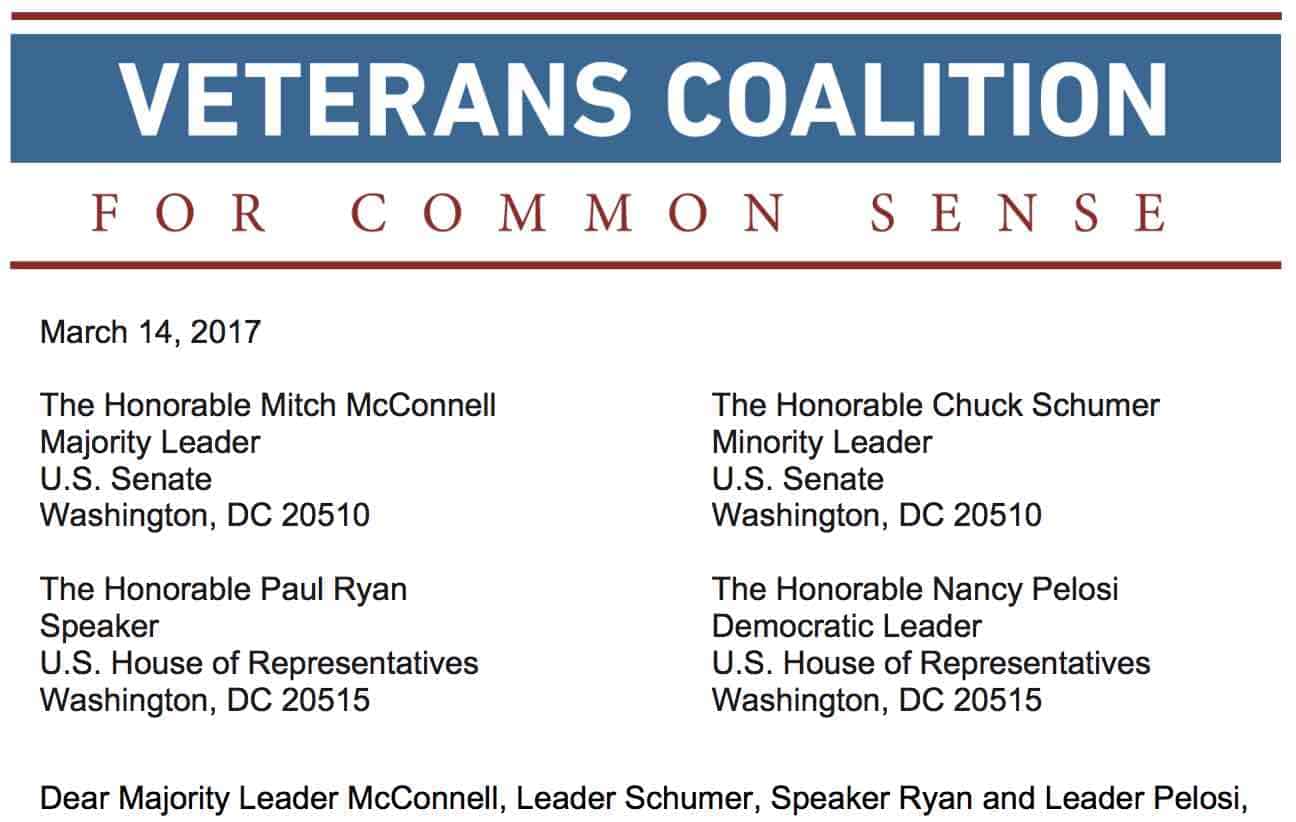 Fourteen ex-generals wrote to Congress opposing the Veterans 2nd Amendment Protection Act. The general basis for their argument was that veterans precluded from gun ownership under VA’s fiduciary program would commit suicide if the law was passed.

The letter was presented on letterhead for their organization called Veterans Coalition For Common Sense.

Presently, VA automatically deems veterans who need assistance managing their VA benefits as also being “mentally defective” without a magistrate or judicial ruling on the matter – – which is required for civilians, just not veterans.

These veterans are placed into the VA Fiduciary Program. A fiduciary is appointed to then manage the finances of these same veterans.

The FBI then teamed up with VA to create a memorandum of understanding (MOU). That MOU forced VA to submit the names of veterans in the Fiduciary Program to the FBI for placement onto the registry wherein they would no longer be able to purchase guns under the Brady Act.

Meanwhile, similarly situated non-veterans would be allowed to own guns and buy guns up until they are brought into court and deemed “mentally defective” by a judge.

Veterans must instead rely on a VA non-lawyer, non-doctor to provide fair adjudication of the medical facts and laws impacting their right to bear arms. Keep in mind, there is a big difference between being “mentally defective” and being unable to balance a checkbook.

Sound like the program has all the makings of a kangaroo court?

New legislation from Congress supports gun ownership for veterans unable to balance a checkbook. Veterans who are mentally defective will still be precluded from gun ownership so long as a judge agrees.

Numerous ex-generals oppose the legislation calling it “irresponsible and dangerous.” In support of their argument, these same generals base the premise of their argument solely on suicide hysteria implicitly asserting veterans unable to manage a checkbook are more likely to be unstable and suicidal than other Americans without evidence:

“The bill you are debating comes at a time when an average of 20 veterans commit suicide each day, two-thirds of whom do so by using a firearm. We know that non-deployed veterans are at a 61 percent higher risk of suicide compared to the American civilian population, and deployed veterans are at a 41 percent higher risk,” they wrote. “When vulnerable veterans have access to firearms, they can do harm not only to themselves but also to family members and loved ones. The impact of these tragedies is felt in communities across our nation.”

Broken down, these bags of hot are arguing:

Now, where is the evidence? Is it next to the Iraqi “yellow cake”?

What about studies supporting this position?

Or are we merely reading about a bunch of has-beens hypothesizing about things not supported by evidence?

I discussed this yesterday and thought the pushback from the generals was worth noting.

First, veterans should have constitutional rights that are the same as other Americans, and certainly not fewer rights.

Second, these disconnected generals are also assuming veterans who struggle managing their finances are unstable and thusly the gun ownership ban is appropriate.Where is the evidence or studies that support these claims?

Where is the evidence or studies that support these claims?

Oh, they are probably in a pile next to the studies telling us Iraq had weapons of mass destruction.

The legislation forces VA to take the veteran to court to prove they are “mentally defective” before revoking their constitutional right to bear arms. This seems fair to me.

I agree that “mentally defective” people should avoid gun ownership.

But if managing one’s finances is the measure for owning a gun, then all of Wall Street should be precluded from gun ownership after 2008. So should Congress.And what about ever VA executive unable to manage their budgets?

And what about ever VA executive unable to manage their budgets?

As for the generals, it sounds like these guys still think the hot air they espouse should trump the rights of former servicemembers.

At the end of the day, these generals are implicitly saying veterans deserve few rights, and less due process, than the civilians they protected while at war.

Here is the list of generals, and I would be curious to hear your feedback if any readers are familiar with them:

As dedicated service members and members of the Veterans Coalition for Common Sense, we write to you today to express our grave concerns with legislation being considered by Congress, the Veterans 2nd Amendment Protection Act. This proposal would put America’s veterans who need our support the most in harm’s way by providing them with easy access to firearms. Instead of passing this irresponsible and dangerous legislation, Congress should instead do more to guarantee that all veterans have access to world-class medical and counseling services. We urge you to oppose this bill.

Our nation is facing a devastating epidemic of veteran suicide. The bill you are debating comes at a time when an average of 20 veterans commit suicide each day, two-thirds of whom do so by using a firearm. We know that non-deployed veterans are at a 61 percent higher risk of suicide compared to the American civilian population, and deployed veterans are at a 41 percent higher risk. Firearms are the most lethal means when it comes to suicide, resulting in death nine out of ten times. When vulnerable veterans have access to firearms, they can do harm not only to themselves but also to family members and loved ones. The impact of these tragedies is felt in communities across our nation.

Last week, we were pleased to hear Secretary of Veterans Affairs (VA) David Shulkin announce his intent to provide urgent mental health care services to veterans with other-than-honorable discharges. This is a step in the right direction. Over 22,000 soldiers in the Army alone have received these bad paper discharges since 2009 due to mental health conditions, and they are among the ones who most need access to comprehensive mental health services.

But they are not the only ones. In 2008, President Bush signed a law requiring all federal agencies to submit the names of individuals who are legally prohibited from possessing guns to the National Instant Criminal Background Check System (NICS). Since then, the VA has submitted over 174,000 names of servicemen and women who require a fiduciary to manage their benefits and have been determined through clear and convincing evidence to meet the federal standard for gun prohibition. Of these 174,000, 19,000 are individuals that suffer from schizophrenia and another 15,000 have severe PTSD.

For these individuals, possession of a firearm could be fatal. The Veterans 2nd Amendment Protection Act would put at risk the safety of these veterans and our communities by changing the standard for gun prohibition, so the VA’s determinations would no longer stop a veteran from obtaining a gun. Instead, the names of veterans already in the background check system would be erased, putting them at much greater risk of self-harm. This would be irresponsible, dangerous, and life threatening to those who need access to care, not weapons.

Just last year, Congress worked to ensure that all veterans have appropriate due process protections in place through the 21st Century Cures Act. This codified existing practice and guaranteed that individuals who disagree with their final adjudication have the ability to appeal this determination.

We appreciate your service to your country in the United States Congress, and look forward to working with you to support and protect our men and women in uniform and their communities. In doing so, we urge you to oppose the Veterans 2nd Amendment Protection Act. Thank you for your consideration.

What do you think? Should we trust these guys are are they nothing more than has-been windbags?

I noticed the letter fixated on two examples, veterans with severe PTSD and those with schizophrenia. But keep in mind, over 174,000 veterans are on the list. Of that, only a fraction, less than 20%, fall into the categories singled out above.

What about the other veterans? Where is the full breakdown?

We need to have a deeper dialogue on this to ensure no veterans in that 174,000 list are improperly being deprived of any constitutional right.

Keep in mind, once in the Fiduciary Program, these same veterans are also limited in how they can retain counsel, even with their own money.

So how will those improperly denied their rights be able to get representation under the present scheme? 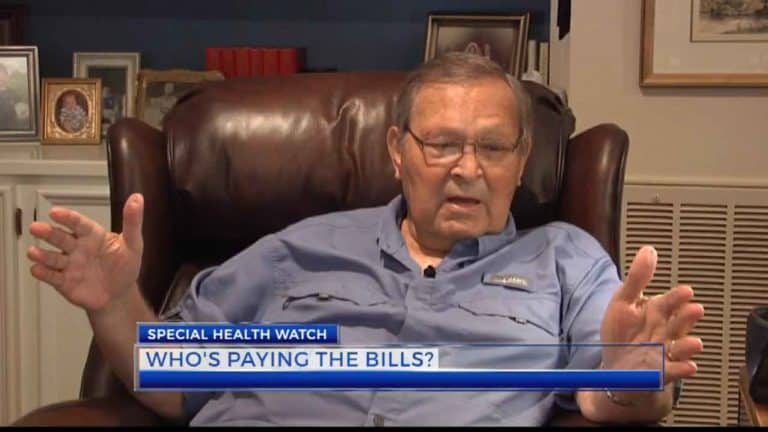 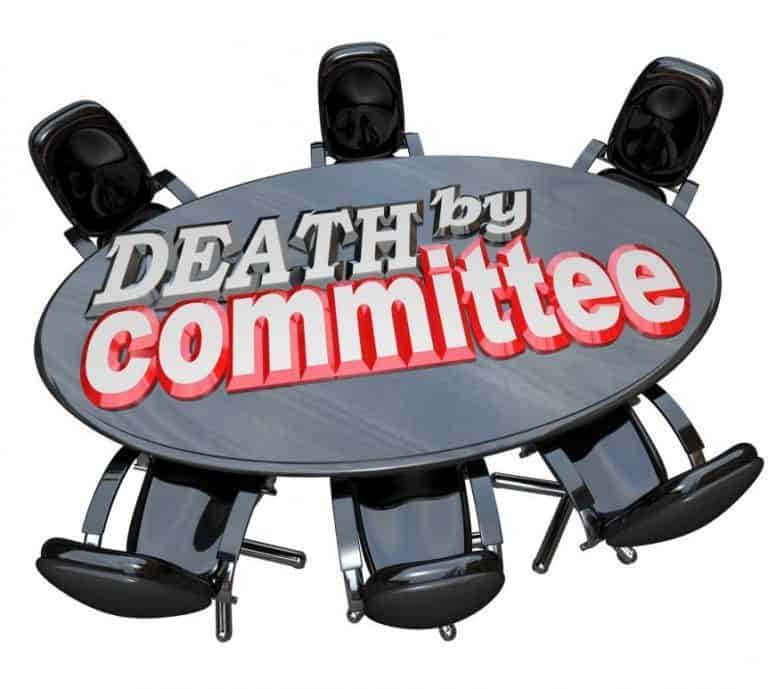