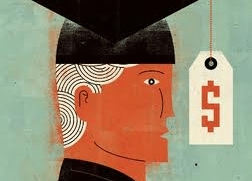 “We deal with people that live in the moment and for the moment.” “Their decision to start, stay in school or quit school is based mor on emotion than logic.” “Pain is the greater motivator in the short term.” These are the words on the sales training pamphlet from Vatterott College. This is what their recruiters think when they call prospective students.

To see what it would be like to get a call from a recruiter, I submitted my phone number to one of the colleges while checking out their online customer forms. Some days later I received a call. “Let’s talk about your future,” the operator said. I replied, “Oh, that’s ok, I was just fiddling with your online forms.” “So, you don’t want to invest in your future with a four year degree?”

Of course, I already have a four year degree and am currently in law school. Needless to say, the comment “invest in your future” did not resonate with me, but I could see why it would make it hard to simply say “no” for some people.

For-Profit colleges have been accused of nasty recruiting tactics. These tactics rely on triggering fear and pain to convince potential students to sign up. So far, this may not be bad if the students who graduated were greeted with jobs. But that is not always the case.

The fear in Congress is that veterans are being unfairly targeted because of their GI Bill benefits. When veterans use up their benefits on these universities, they are not as successful in finding work as veterans graduating from brick and mortar universities. Or rather, this is the fear of Congress.

In 1998, Congress changed the law to allow 90-10 split between federal aid and money that comes from outside of the federal allocations. The GI Bill, since it comes from veterans, is counted as the 10 percent. Legislators are concerned veterans are inappropriately targeted by recruiters for that reason. New legislation would stop that. The GI Bill would no longer count toward that 10 percent and the split would become 85-15.

In looking at the facts at both sides of the argument, it reminded me of a skit from Monty Python and the Holy Grail. There were some facts, some fear, and a lot of unanswered questions. So, should we burn all For-Profit colleges at the stake?

Sir Bedevere: There are ways of telling whether she is a witch.

Sir Bedevere: Tell me. What do you do with witches?

Sir Bedevere: And what do you burn, apart from witches?

Peasant 3: …because they’re made of… wood?

Sir Bedevere: Good. So how do you tell whether she is made of wood?

Peasant 1: Build a bridge out of her.

Yes. Let’s build a bridge out of them. Rather than revisit the arguments presented, we decided to ask veterans what veterans should be allowed to do with their benefits (Huffington Post: Romney Has Some Great Friends Who Are For-Profit College Owners).

One veteran wrote, “We earned it!” in response to the idea of the government stepping in to tell veterans where they should spend their money. Another wrote, “If they are truly subpar programs, then they should not get funded.” Finally another wrote, “Our service people gave their all for us. We should allow them to choose the college of their choosing.”

How could veterans seem to be so opposed to the hysteria? “Let us choose.” “We earned it.” Veterans were telling me that they are smart enough and responsible enough to choose for themselves.

However, the legislation was not preventing veterans from attending For-Profit colleges. It was merely changing the incentive to recruit veterans so that all students would be equally pursued. Or, at least that’s what it appeared to be on the surface. But, is the witch made of wood?

We are heading to Washington D.C. to look into the matter. My hunch is that we will find facts that support some of the colleges but not others. I am concerned that the tuition prices are much higher than they should be for distance learning.

In theory, distance learning is supposed to create economies of scale, offering high quality educations at more affordable prices to more students. Currently, tuition costs appear to be as high as traditional nonprofit colleges. But when a witch is made of wood, perhaps inflated tuition is ok. If there were jobs at the end of the rainbow for all college grads, this issue would be moot. Unfortunately, that is not the case for now and jobs are essential. Plus, not finding work makes it impossible to pay your federally backed student loans.

We’ll get back to you with our investigation. According to the Monty Python skit, for those who are curious, this is what we do with witches:

Sir Bedevere: But can you not also build bridges out of stone?

Sir Bedevere: No, no. What else floats in water?

Peasant 1: If she weighed the same as a duck… she’s made of wood.

Facebook Twitter LinkedIn Email PrintVocational Rehabilitation is many things to many people. To some, it’s not worth the headache….