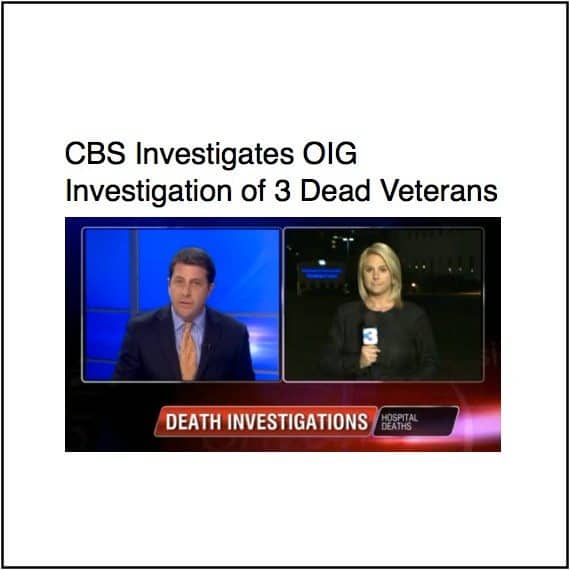 MEMPHIS – Allegations of inadequate care is said to have been linked to the deaths of three veterans at the Memphis VA Medical Center ER last year.

According to local CBS News (WREG):

In April 2012, a patient with back and neck pain was given medication he was allergic to, and went into cardiac arrest. He was taken off life support eight days later.

In August, a veteran, who also had back pain, was given four different medications.

Forty-five minutes later, he was unresponsive. He went into a coma, and died 13 days later.

The last victim, a vet with a history of medical issues, was admitted with shortness of breath and eye pain. He also had extremely high blood pressure.

He died a day later, because, according to the report, his blood pressure was not “managed aggressively.”

The OIG concluded that a contributing cause was a failure of the hospital to follow protocol. It was not creating root cause analysis (RCA) in a timely manner.

Judging from the coverage, it does not look like anyone in VA will be penalized for the procedural deficits that led to the deaths.

Rep. Jeff Miller, Chairman of the House Committee on Veterans Affairs had this to day about the deaths:

Like other hospital systems, VA isn’t immune from human error – even fatal human error.  But what the department does seem to be immune from is meaningful accountability. Given that these tragic events are part of a pattern of preventable veteran deaths and other patient-safety issues at VA hospitals around the country, it’s well past time for the department to put its employees on notice that anyone who lets patients fall through the cracks will be held fully responsible.

The quality of VA health care has been in question for some time. As Rep. Miller points out, problems happen. Unfortunately, VA tends to try to cover up the impacts of bad decisions that lead to maiming and death of this country’s veterans.

Last year, OIG investigated deaths of 5 veterans at the Marion VHA facility in southern Illinois. It was only after prodding by Senator Dick Durban that VA OIG decided to lift a finger.

There, it was alleged that VA hired a formerly retired doctor to lead its ICU. This doctor, referred to only as Physician A, was previously retired for 8 years prior to VA hiring him.

That same doctor failed to follow standard procedures for patient intubation, among other things.

I spoke with an insider about the matter during that time. She claimed VHA management at the hospital was hammering whistleblowers. Many doctors who were veteran friendly at the facility had also decided to leave due to the adversarial atmosphere, there.

If the doctor is the same doctor as Physician A, he was trained in Pakistan. To my knowledge, that doctor is still in charge of the ICU, and no administrative punishment was handed down.

It’s time for America to stand up against the lack of transparency in this Cabinet Level Agency.

Read more about the 5 veteran deaths in Marion, below: