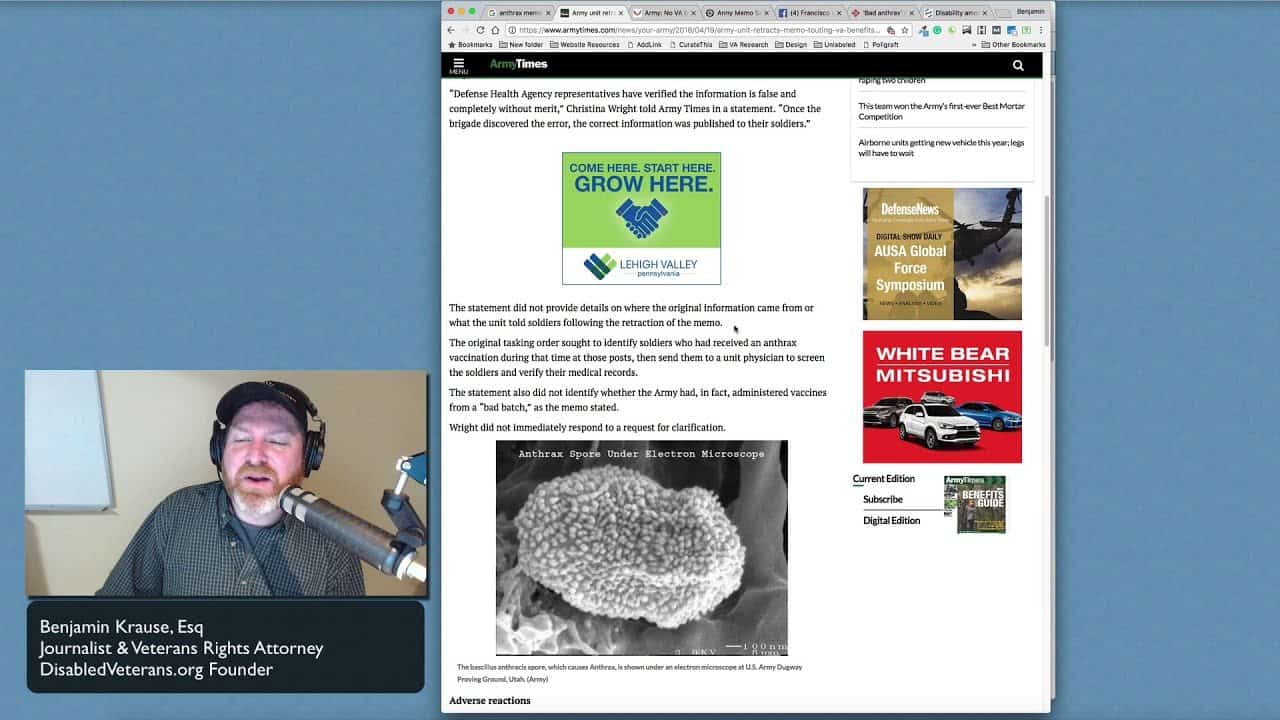 The Army memo about the bad batches of the Anthrax Vaccine circulating the web over the past week caused a great deal of confusion. Myself and another attorney created a video to explain the memo Here are five things you need to know.

Let’s get a few things straight before we jump into the analysis of the authenticated document and its content. The Anthrax Vaccine program was highly controversial since its inception in 1998. The company manufacturing the non-FDA approved vaccine committed many errors in making the vaccine. Numerous batches of the vaccine were known to be bad.

Numerous veterans believe they were harmed by the vaccine. The majority of the injuries were transitory according to the US Army but some were not.

A History Of Falsehoods That Surface Years Later

First, the US Army has lied to the American public, its soldiers and veterans about a variety of significant issues:

Okay, so that is a brief history of some of the falsities we are aware of coming from the US Army. Of course, with each of the above incidents came a period of absolute denial from US Army similar to what we see today.

Is Use Of Propaganda Lying?

For those of you unsure or doubtful as to whether our government engages in spin related to topics of warfare, you may want to harken back to our battle cry for invading Iraq in 2002-2003. According to the journal Public Relations Review:

Techniques of public relations and propaganda were an essential part of the 2003 war in Iraq. The government framed the issues, story line, and slogans to serve its purposes. Embedding journalists, staging showy briefings, emphasizing visual and electronic media, and making good television out of it were all important to fighting the war.

You may recall many years later, America was told the “yellow cake” issue and related rhetoric was false. We also know the war that was supposed to be quick and cost less than $100 billion, paid for by Iraqi oil money, now costs taxpayers of $4 trillion.

I strongly encourage anyone curious about what happened to Pat Tillman to rent the actual documentary. What I am linking here is an odd replication of it. It’s a great documentary covering what our country did to him and the possible motive.

Second, the US Army memo addressing bad batches of the Anthrax Vaccine addressed in the news this week is an authentic memo meaning it was digitally signed with a DOD CA and cannot be repudiated. The person signing the memo is essentially indicating his believe the content of the memo was true and accurate at the time he signed the document.

3. Spin Starts With A Bureaucrat

Three, the Massachusetts secretary of the Department of Veterans’ Services, Francisco Urena, immediately chimed in on Facebook that the memo was a scam and fake. His position was echoed by numerous trolls through social media. Calling the memo a scam was not accurate whatsoever.

Four, the US Army retracted the memo two days in the Army Times after we exposed that the memo itself was authenticated. The Army retraction said the memo contained false information but the Army refused to provide additional details about what the memo should have said.

That same Army Times article omitted one sentence from the Army’s statement that was published elsewhere indicating:

“While the risk of serious harm is extremely small, there is a remote chance of a vaccine causing serious injury or death,” Wright said. “In those rare cases, VA disability or death benefits may be granted.” (emphasis added)

The underlined portion was omitted from the Army publication. As I warned on Facebook, a fair amount of spin now surrounds this memo including the title of a Task & Purpose article on the submitted stating, “Army Memo Saying Soldiers Got Bad Anthrax Vaccinations Is Horsesh*t”. What evidence do they have?

The US Army submitted a statement saying the “information is false and completely without merit… Once the brigade discovered the error, the correct information was published to their soldiers.”

What was the “horsesh*t” information in the memo? Not sure because the US Army chose to basically pull the “just trust me” card and Task & Purpose accepted that position. 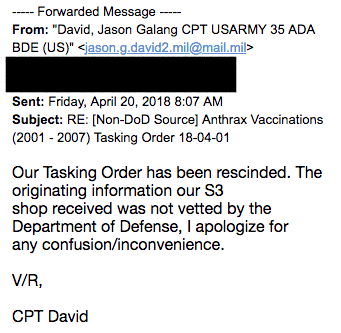 Fifth, a follow-up email from US Army indicates the information in the leaked memo was published within being “vetted” by DOD prior to being circulated online. It certainly seems like the main problem US Army has with the memo is that it was leaked to the public.

If you read an earlier text message with a careful eye that also leaked to the press about the leaked memo, it certainly reads like the US Army’s position is that since it was leaked without permission and poorly written that the information is totally false and all of America should disregard any possible harm alleged by veterans concerning the forced US Army inoculation program. 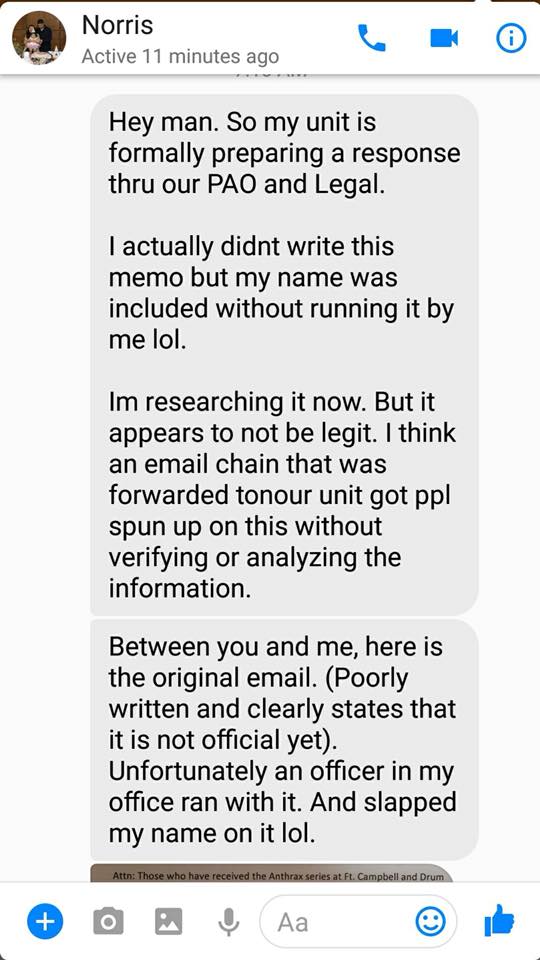 Should We Believe US Army Now?

If you still believe we should put our full faith and trust in the US Army every time it denies an event or injury, then I wish you great success in your life.

For the rest of us, I plan to continue evaluating this matter because something was underlying this communication and veterans have a right to know what it is.

One thing we do know is the memo is authentic and it addresses serious matters that I intend to dig into.

One Last Thing – An Anthrax Study

I want to leave this topic for the weekend by providing some of the researchers out there with a 2012 study into any connection between the Anthrax Vaccine and long-term disability, Disability among US Army Veterans vaccinated against anthrax. 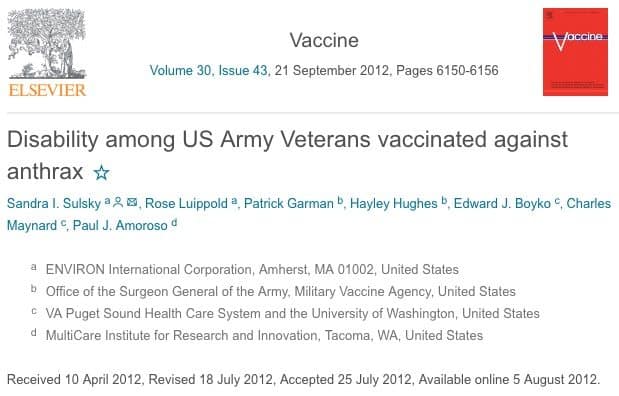 Would you ever rely on data from an insurance company to make a conclusion about whether an exposure resulted in disability in fact rather than disability only because we say so?

That seems to be what a group of researchers did when telling the public it reached the conclusion “This study provides evidence that vaccination against anthrax is not associated with long term disability.”

You might be wondering how this panel of government researchers and vendors reached such a conclusion?

Would it surprise you to know that whenever a veteran claimed disability from residuals of the anthrax vaccine that their disability rating award would go down?

So, apparently, all the veterans experiencing complications are malingering or mistaken leading me to wonder if the vaccine even has some magical disability healing powers?

Seriously, though, we know VA frequently denies all claims of veterans whenever a hot-button issue is listed in the claimed conditions. The agency is known for lowballing veterans with Burn Pit exposure and Gulf War Illness. The agency also lowballs veterans who claim PTSD or experience residuals of a traumatic brain injury.

And, we should expect nothing else from the agency previously knowns as the Bureau of War Risk Insurance. Folks, VA is an insurance company.

The renaming function similarly served to skew public perception of the agency in the same way propagandists rebranded the War Department into the Department of Defense. 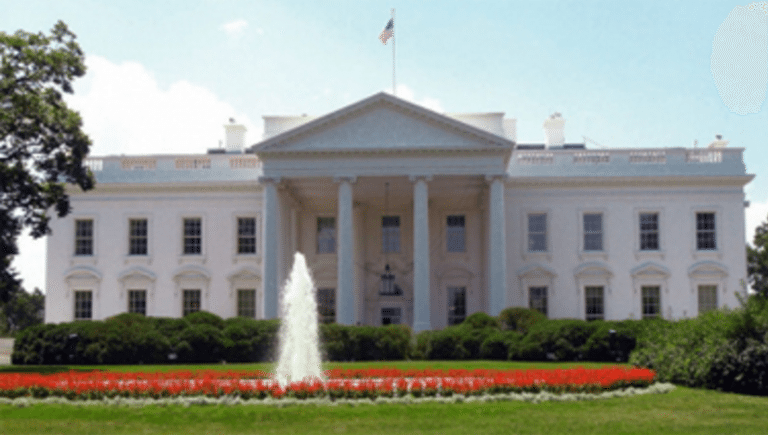 Facebook Twitter LinkedIn Email Print So here is something we have not seen in a few decades; what will…