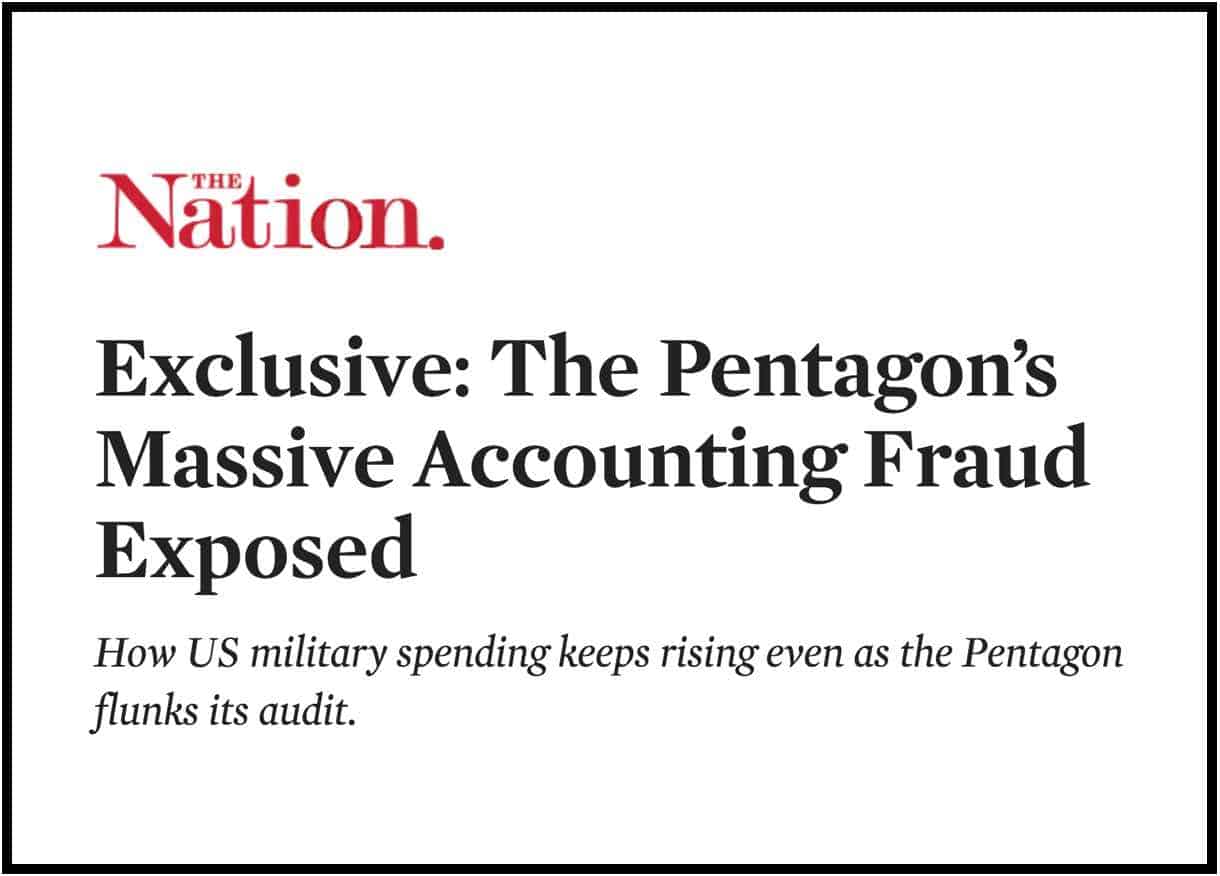 The Nation just published its lengthy investigation into a massive Pentagon fraud scheme where DoD misstated its budget to Congress, year after year, piling billions into secret accounts to fund projects without oversight.

The scheme itself, as you will see from excerpts below and if you read the report, seems eerily familiar with what we see from the Department of Veterans Affairs year after year. This makes me wonder if the Pentagon is doing it, how much money is VA actually sitting on that is off its balance sheet, and what is the agency doing with the money?

All Out Pentagon Beancounter Fraud

According to The Nation:

The fraud works like this. When the DoD submits its annual budget requests to Congress, it sends along the prior year’s financial reports, which contain fabricated numbers. The fabricated numbers disguise the fact that the DoD does not always spend all of the money Congress allocates in a given year. However, instead of returning such unspent funds to the US Treasury, as the law requires, the Pentagon sometimes launders and shifts such moneys to other parts of the DoD’s budget.

This practice is essentially money laundering. Any civilian guilty of the same would be in prison for decades. The practice violates Article I Section 9 of the Constitution, which also requires a publication of monies dispensed by the Treasury.

But since when does the Constitution apply to whatever the upper crust is doing?

Among the laundering tactics the Pentagon uses: So-called “one-year money”—funds that Congress intends to be spent in a single fiscal year—gets shifted into a pool of five-year money. This maneuver exploits the fact that federal law does not require the return of unspent “five-year money” during that five-year allocation period.

The phony numbers are referred to inside the Pentagon as “plugs,” as in plugging a hole, said current and former officials. “Nippering,” a reference to a sharp-nosed tool used to snip off bits of wire or metal, is Pentagon slang for shifting money from its congressionally authorized purpose to a different purpose. Such nippering can be repeated multiple times “until the funds become virtually untraceable,” says one Pentagon-budgeting veteran who insisted on anonymity in order to keep his job as a lobbyist at the Pentagon.

In 2015, Congress appropriated $122 billion for the US Army. DoD records show the Army’s budget that year included $6.5 trillion in plugs that “lack[ed] supporting documentation.” This means no ledger entries or receipts exist to show how the money was spent. Instead, DOD IG indicated the 16,000 records possibly showing how the money was utilized was “removed”.

Again, this is not directly on point with VA’s own budget, but most VA employees are former DOD or military employees of some kind. Given the overlap, it seems plausible that some of the individuals moving money around in DOD are passing on the same tricks to their VA brothers.

Personally, I find this news report as a bit of a bombshell. While we suspected Pentagon’s fraud was huge, we did not know it was that huge. Sadly, though, based on the 3 comments (at the time of this writing) at the end of the report, it does not look like the public cares about how the money is spent.