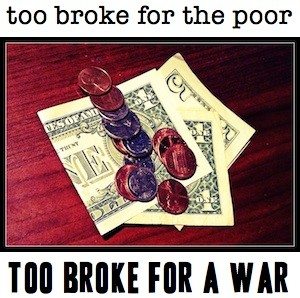 When reading today’s big headline from Miltiary.com, I remembered the song, “If I had a million dollars,” by Barenaked Ladies. Great song. I think about it often from my little perspective. A cool million would be great and I would change my small piece of the world.

Today, Miltiary.com brought us some news from Brown University that is anything but new news, “Study: Iraq War Cost 190K Lives, $2.2 Trillion.” This certainly was some war we got ourselves into.

It killed a lot of people. It made the Middle East less safe. It made us less safe. And it cost us the future prosperity of this generation and the next, because all that money needs to be paid back to the banks that financed the war. We can all rest assured, it will be paid back through higher taxes and greater austerity measures.

Recently, Washington DC has started to make a “big deal” out of the $2 trillion it wasted on keeping us safe from Saddam Husain, a man who realistically posted no greater threat after 9/11 than before. They are worried that the long term costs of caring the for disabled veterans who came out of the wars will really put a damper on our ability to have enough money to fight the next “big one.”

Now, we Americans are left holding the big tax bag and the taxman is knocking on every door waiting for us to pay him back.

The Meaning Of Life

What does all this mean? It means be cautious.

As a result, we will also probably see more “joint” programs with the State Department, DoD, and the VA – they are all under the same basic budgetary umbrella. If VA spending is “protected,” then joint programs will be a secure way for these other two entities to grab at funding and then reposition it in the name of “mistakes in planning,” like the merging of the VA with the DoD health care systems the agencies recently admitted was a flop. “There went $1 billion.”

Today’s Military.com today titled, “Iraq War Cost 190K Lives, $2.2 Trillion,” is too little too late. Where were they when veterans advocates like me were talking about this years ago? The headline is anything but news, given that economist Joseph Stiglitz predicted the war would cost many lives and over $3 trillion well over 4 years ago.

Brown University has trumpeted these figures as though the information should be new and shocking. Instead, the figures are just a reminder of how incapable we Americans are at holding our elected officials accountable when they bankrupt our country for this generation and the next.

President Dick Cheney and sidekick, fake President George W, told the American public that the war would cost around $60 billion. They said Iraq’s oil would fund it. They said oil companies and government contracting firms would make billions.

Well, we all know they were at least right on something. Oil companies and government contractors made out like bandits, and they cannot wait to go to war with Iran.

But when it came to being the world’s police force, he continued, someone has to do it, and who better than the US of A. I had to remind him that if we cannot afford our current wars and obligations, that we most certainly should not be fighting wars in places like Africa, Syria, and Iran. We just cannot afford the obligations that result from being the world’s police. That’s just the truth of the matter.

In my mind, we need to bring all our troops back to regroup. Let’s fix our roads. Let’s fix our schools. Let’s rebuild our country’s morality and its role in the world. Rather than being #1 in confidence, let’s be #1 in education, #1 in exports, and #1 in job security.

While we are at it, let’s also be #1 in caring for our poor and elderly. Let’s be #1 in fighting government corruption and fraud. Let’s be #1 in the things that are truly Godly, rather than #1 in creating wars and destroying God’s creation.

Sometimes I dream about what it would be like to be rich. Not Beverly Hillbilly rich, but Federal Reserve rich. If I had a trillion dollars, I would prosecute all those who got us into the wars in the Middle East for corrupt reasons.

I would prosecute these minions and their masters to the ends of the earth, if I had a trillion dollars.