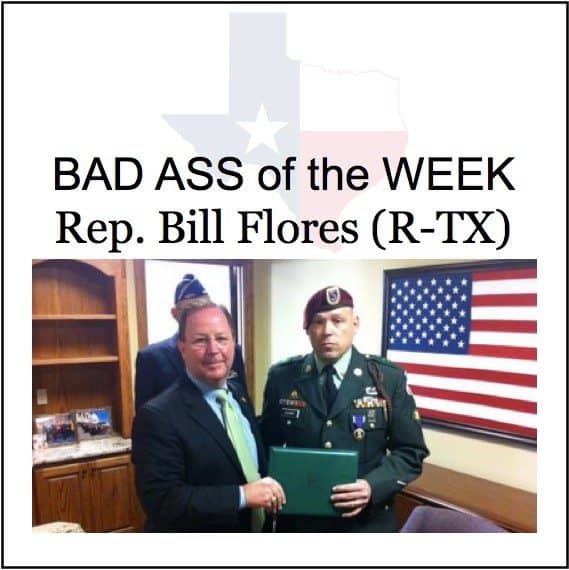 Rep. Bill Flores won Bad Ass of the Week because of his pointed and thorough questioning of VA Secretary Shinseki. His question focused on whether politics was coming ahead the needs of veterans in the shutdown.

Rep. Flores highlighted the many twists and turns in VA’s message about how the shutdown will impact veterans benefits. Initially, VA said the benefits would be fine. However, just days before the shutdown, VA reversed its position.

Rep. Flores drilled down into the matter to raise the question, that the VA manner in which VA is shutting down may be putting politics ahead of mission.

VA’s Secretary Eric Shinseki stated that the President did not influence how VA shutdown. Rather, VA was merely inept at preparing and planning despite having substantial notice than an issue might arise that could effect veterans benefit payouts.

In case you missed it, I included a clip of Rep. Flores’ questioning.

I have had Shinseki’s response analyzed by a psychiatrist to get an impression. That psychiatrist believes Shinseki was being less than truthful when he stated that the wind down and threat of benefits cuts was not politically motivated.

But regardless of what the doc says, watch the video and decide for yourself. To see all the highlight clips of the hearing, follow this link: https://www.disabledveterans.org/2013/10/09/video-highlights-va-totally-dropped-ball/