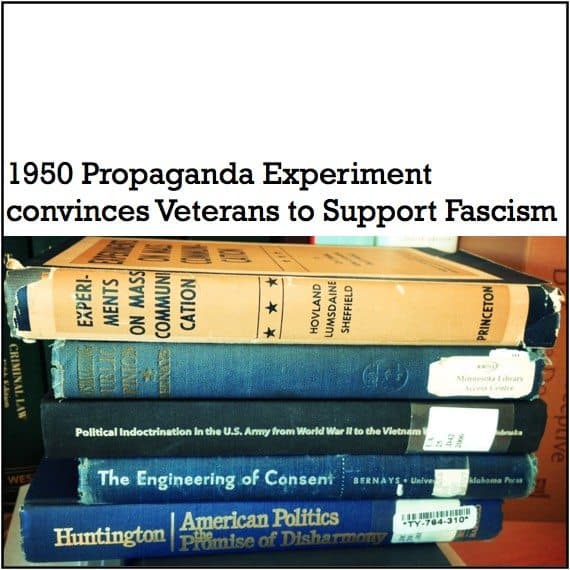 Let’s all drink tea while Rome burns. With all the negative press going on about wars, the shutdown, and Healthcare.gov sucking, it looks like mainstream media and VA are turning to puff pieces this week.

For that reason, I had to look far and wide for something that would be interesting, and I found it. Our topic this week is research on how to convince veterans to accept fascist propaganda. I want to know what you think about using veterans in this way, and how it impacts our society now. The picture above is of some book titles in my own library that I use to research topics like this.

To give you a quick background, social scientists have been running experiments on veterans and the military since at least WWII if not earlier. Following WWII, researchers gathered extensive data from the military and veterans about issues ranging from GI Bill usage to attitudes about the war.

In 1950, one such study was published in Public Opinion Quarterly titled, Reactions to Fascist Propaganda – A Pilot Study. Veterans were the guinea pigs for this one.

More on this below.

Hi and welcome to another edition of Monday Morning Quarterback for veterans. I am the founder of DisabledVeterans.org and your host, Benjamin Krause. This is where I find some pressing issues in the media and share my take on it with you.

Generally, journalists report on one specific topic or incident at a time but fail to include the broader conversation. So, I include background to provide you with a fuller understanding of the issues.

In a day and age when the Supreme Court is focused on Gay Rights and Amnesty for illegal immigrants, I thought it might be useful to understand how politicians use your data to convince America of their positions.

Vet Statistics: Experiments on how to get Veterans to tolerate fascism

In 1950, University of Chicago researches decided to learn how to induce acceptance of fascist propaganda on 50 veterans.

Veterans were given different propaganda pamphlets, one based on tolerance and the other based on fascism. The goal of the study was to monitor and test how to sway the opinion of veterans who are in the middle to join the ranks of those who supported an anti-Semitic message.

The research paper was titled, Reactions to Fascist Propaganda – A Pilot Study.

That link will bring you to the study’s abstract, which reads:

Fifty veterans who had previously been interviewed intensively, and whose tolerance attitudes were known, were exposed experimentally to anti-Semitic propaganda. While most of the tolerant men disapproved of the propaganda and intolerant men approved it, there were important deviant cases. Analysis of the reactions of the group indicated that such propaganda was most likely to be effective if it appeared authoritative and objective, and if it served to diminish anxieties of the recipient without arousing new ones.

Please pay special attention to the last sentence. The research was geared at learning how to convince the veteran population that the fascist message was reasonable. This information could then be extrapolated to how to craft messages to the American people.

When you consider the Fox News/ MSNBC models, this kind of research has particular use in messages acceptance when using propaganda. In some ways, the broadcast tools embody certain schools of thought from Neo-Conservative and Neo-Liberal camps that are dangerous.

Both of these schools of thought have brought us into an economic tailspin, endless wars to export democracy abroad, and potential race wars at home. For that reason, we must be on guard against the tools of deception the media and politicians are using. This summary of the paper is intended to help equip you with those tools.

Experiments on Military in History 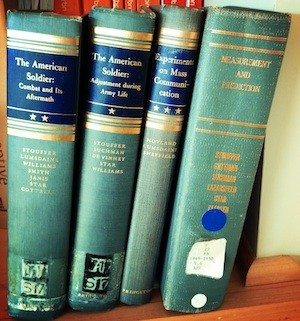 Veteran and military populations have long been the focus of study by social scientists. Following WWII, Princeton University published a four-book study called The American Soldier. The third book in the series was titled, Experiments in Mass Communication.

SAGE sells a text in the series SAGE Library of Military and Strategic Studies titled Propaganda that sells for around $975. It is a collection of journal articles on the subject. Here is a brief listing of some that I found interesting:

Check it out if you have time. Many of the journal articles can be accessed for free by university students to avoid having to pay the $975 cost of the articles in aggregate form.

It would appear that this research on inducing fascist acceptance was merely an extension from the earlier research in the Army.

Since most of you might be curious about what the full journal article says, I thought I’d request a copy and relay that data to you here.

What the abstract does tell you is that the study was focused on how to convince viewers to accept anti-Semitic messages through different forms of communication styles. It does not explain which styles worked.

The goal of the study was as follows:

The purpose of exposing these men, whose attitudes had previously been studied, to intolerance propaganda was not to assess whether specific attitude changes took place. Our chief interest was to gain understanding of the reactions with which the individual responded when con-fronted experimentally by ethnic appeals. Another question we hoped to throw light on was the way in which different degrees of tolerance were related to differences in the reaction to such propaganda.

The deviant cases, those outside of the normative response, were the most interesting and the general focus of the study. The researchers were interesting in learning how to shift originally polarized individuals into accepting a converse position through propaganda. The research suggests that shifting positions would be achieve through use of authority figures to deliver the anti-tolerance message:

In line with our findings of the initial study on submission to external control, it was expected that if any arguments would impress the men, symbols of authority (as represented in the pamphlets by quoted “authorities”) would be one of them.

This kind of authority was not merely from propped up talking heads like today’s Fox News Bill O’Reilly types. Instead the messages were said to have come from senators and other “big men.” One veteran commented about how he thought the pamphlets were “pretty good.” He went on:

‘It has what a lot of big men said about the Jews – Ford, some senators. It was sent through the mail so it must be good or the Jews would raise a big stink. If we keep the ball rolling we might do something.’

The research pointed out that propaganda like this might be most effective in moving insecure people from one point to another.  If true, the goal of the propaganda would be to decrease the insecurity while not arousing new anxiety through message control and the authority level of the communicator.

When compared with the pro-tolerance message, veterans stated that the anti-Semitic message was more effective. The researchers argued that this result makes sense because “many persons believe that in our society an invitation to aggression is more effective than an appeal to reason-a belief only too often based on their own attitudes.”

The researchers concluded that the pilot study was effective in identifying that ethnic stimuli can be useful in swaying opinion once an individual loses control over his asocial tendencies. Heightened levels of anxiety reduce the effectiveness of convincing the person to accept anti-tolerance messages.

According to the paper, further research was warranted to determine more readily how people can be “impressed by anti-tolerance propaganda.” They hypothesized the following for future research purposes:

1. Their tolerance must not be deeply anchored in their general attitudes and beliefs but must be surface phenomena, reflections of what they think are “correct” or expected attitudes. That is, their controls must require only conformity rather than genuine tolerance.

2. The material to which they are exposed must seem authoritative and fairly objective. (This is similar to attitudes encountered among German people, where vague attitudes of tolerance were swept away by authoritative statement. The attitude of these Germans was: We are “little men” and when the government tells us how dangerous the Jews are, we must believe it.)

3. The last and most important condition is that the material must be so designed as to indicate and urge actions which the individual feels are suitable for diminishing existing apprehensions without arousing new ones.

In the end, the research seems to be all about how politicians with the help of the media can create platforms of intolerance to attract new voters without alienating their base of voters.

The paper finally concludes that:

At the present level of social stability, fascist propaganda which makes use of ethnic intolerance – that is, appeals to the individual’s asocial tendencies – is not likely to succeed if those appeals generate anxieties which the individual is not able to master. In this sample, the initial intensive study found that a reliance on external authority, in the absence of internalized norms or ego strength, was enough to restrain asocial tendencies. To the degree that propaganda appeals can convincingly speak in the name of powerful symbols of external authority – and not only pretend to do so – to that degree may potential effectiveness be realized.

This seems to imply that the goal of the research was in fact to learn how to use race and ethnicity to bring about certain fascist results through increasing intolerance.

In the media today, we see ethnic issues all around us. Next time you hear a politician speak, remember this kind of research. Also keep in mind that this research was pioneered in 1950.

I would like to know how much we know after 60 years of conducting similar kinds of studies.

Facebook Twitter LinkedIn Email Print I am taking the day off. I wish you all a reflective Memorial Day…