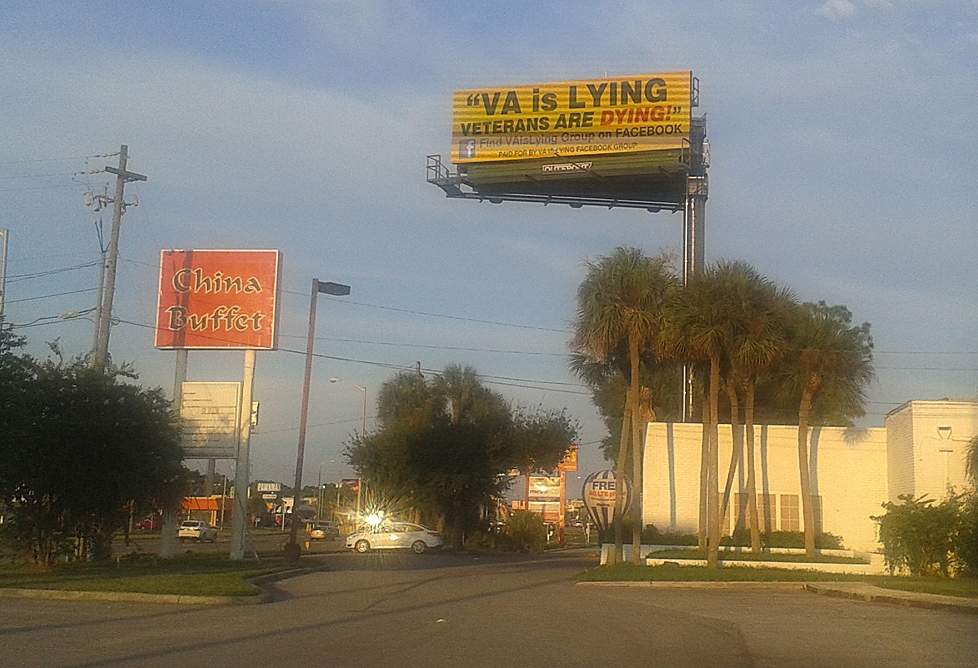 Outcry concerning lies from VA have resulted in a back and forth between VA is Lying and officials who claim there is no connection between the backlog decrease and appeals increase.

How is that? As you will see, VA loves engaging in word-smithery rather than giving honest responses about serious issues veterans are concerned about.

RELATED: Are VA Claims At All Time Lows?

Ignoring veterans at Haley VA Hospital in Tampa, Florida, resulted in the group VA is Lying firing up a billboard practically in the backyard of the facility at the end of last week.

Ron Nesler, the group’s creator, put it up near Haley VA after hearing reports that the hospital’s director refuses to speak with veterans. Nesler was told, when reaching out to the director for help for another veteran, that “it is our policy that the director’s office does not accept phone calls from veterans.”

Nesler told the Tampa Tribune that the group’s focus not only pushes back against hospital misdeeds but also veterans benefits. In an interview, Nesler said VA is essentially playing a game of hide the bean by moving one claims from the backlog into the blackhole of appeals:

“Look at the VA backlog, VA claims they are fixing the backlog, but veterans know better. VA’s way to fix the back log is to move claims into the black hole of the appeals process, so VA looks a little better on paper, but the same vets are still waiting, just in a different line. And these vets are dying while they wait, and VA is lying.”

As I understand it, the ratio is not relative to the decrease at all. Instead, VA is pushing out backlog claims without ensuring the accuracy of the decision in question. So how is it no correlation exists from resolving the backlog and the substantial increase in appeals?

Surprised by VA’s persistent adherence to its propaganda?

VA’s message is clearly making its rounds across the web. The renowned Council on Foreign Relations recently repeated the message on its own Defense in Depth blog.

Yet, some groups including Veterans Warriors are pushing back against the new VA myth, and I will follow up with information about their counter-message research results soon.

According to the article, Nesler said the billboard is rotating and costs around $1,000 per month. So far, his group has raised around $19,000 in three weeks to put more billboards up around the country. The next VA is Lying billboards are going up in Augusta, Georgia and Minneapolis, Minnesota.