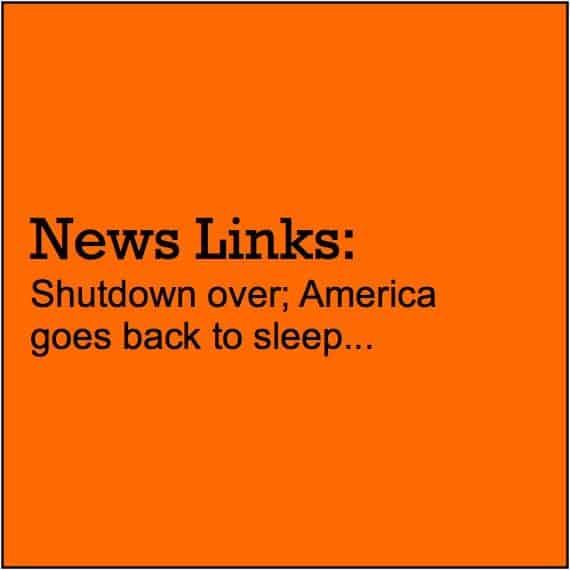 Time to get to work.

Here are some of the news topics I came across this week that I thought you’d find interesting now that the government is “on” for the next couple months. These links came from VA, NOVA, and Veterans Today.

Take a look into this information and see if you find anything worth writing about next week. Send me a note.

Click on the red linked title to read the full article.

VSO’s Use Shutdown as Case for Advance VA Funding

Military.com – The government shutdown may be over, but veterans organizations are not relaxing their demand that Congress pass legislation to fully fund the Department of Veterans Affairs a full year in advance as a way to prevent future shutdowns from interfering with its mission.

From National Organization of Veterans Advocates

Congressional Inaction is like an “Abusive Relationship” to some Veterans

U.S. News & World Report – Tuesday’s event was organized by The Military Coalition. More than 30 other veterans advocacy groups, including the Veterans of Foreign Wars, the Wounded Warrior Project and New York-based Iraq and Afghanistan Veterans of America sponsored the event and contributed speakers.

Pittsburgh Tribune-Review – The incident triggered the VA’s second-largest breach of protected data nationwide in three years, potentially compromising data for about one in 10 patients… Though the VA by law must disclose privacy breaches affecting more than 500 patients to the Department of Health and Human Services, officials there told the Trib that the VA failed to alert them.

Salisbury Post – Dealing with legal affairs can be a complicated process, but having the right advice on how to handle them can make all the difference. The W.G. (Bill) Hefner VA Medical Center is now offering veterans help in navigating the legal system by providing legal clinics on campus.

Richmond Times Dispatch – William Haneke signed up for the Army in 1961 and, back then, the deal seemed clear: Haneke would risk his life and health for the nation, and the nation would take care of him and his family if he was killed or injured on duty.

The American Legion, Student Veterans of America (SVA) and Veterans of Foreign Wars (VFW) have created an interactive map that will help student veterans decide which States provide them the best deal on college.

The Virtual In-State Tuition Map maps out the entire country and color codes each State according to whether it allows all veterans to attend state colleges at in-state tuition rates. The map will be updated regularly wh en new information and updates are verified. To find an SVA chapter near you, access SVA’s chapter locator.