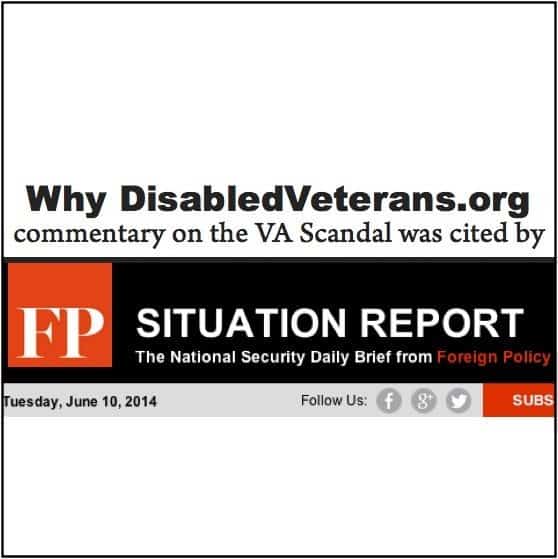 Foreign Policy Magazine circulated its newsletter yesterday with surprising coverage of the VA Scandal. In its National Security Daily Brief, Foreign Policy included a great variety of commentary on the VA scandal from a number of sources including DisabledVeterans.org:

Benjamin Krause, writing in a blog post on the DisabledVeterans.org Website: Obama “will need to address the apparent and embarrassing incompetence of his staff regarding its inability to properly vet candidates in [a] timely manner…The second, and most difficult, is that he will need to address the fact that being an executive at VA is a very unpopular career choice in the middle of a major scandal.”

This may lead some of you to ask the question, “Why is the VA Scandal and treatment of veterans a foreign policy issue?” The answer is simple. How America allows veterans to be treated directly impacts our ability to recruit from the top pool of candidates in this country. Americans fondly refer to this pool as “the best and the brightest” individuals our country has to offer. With no draft, these individuals will have the option to not serve, which impacts recruit quality. Let me explain.

For years, I have called the unmistakable crimes against veterans by the Department of Veterans Affairs a dubious attack against our national security. America’s ability to be militarily secure requires that our military be qualified and competent, which directly impacts the success of our foreign policy. That is the connection. My simple theory here is this: Our ability to recruit more quality soldiers is dependent on our positive treatment of veterans, because more individuals from the pool of “the best and the brightest” will sign up for military service.

Today, there are many options that will allow Americans to have successful careers and be patriotic without serving in our Armed Forces. This makes sense to most people, but the media does not discuss the connection often enough. Since Foreign Policy touched on the topic yesterday, I thought it was an opportune time to address it here.

Let’s test out this dependency theory with a quick thought experiment.

Would you work for a dishonest employer who abandons other employees after they are harmed? Put another way, would you work for an employer if the work is dangerous, there is no guarantee of Workers’ Compensation, and there are no adequate health care facilities to treat you if you are injured? Oh, and let’s not forget to include that the pay will be low and you will be away from your family. People with options who are the best and the brightest would likely say, “No.”

Honorable and honest treatment of military members and veterans directly impacts this dependent relationship. When the two groups are treated well, Americans perceive military service as a good and trustworthy endeavor. I use the word ‘trustworthy’ because, in a perfect world, our recruits could rely on our country to honor its commitments after service if injured. In theory, if there is trust, there is a relative increase in recruit quality.

Today, we see the exact opposite reality, and the potential is there to diminish the quality of our Armed Forces and to harm our foreign policy as a result. There is no doubt that many amazing Americans are serving today. But, reports are on the rise of increased gang violence in the military along side increasing headlines exposing military prostitution indicate America needs to be concerned. According to a recent Marines report, there are growing concerns that troop quality may go down in the near term. The signs all indicate recruit quality is at risk in part due to an erosion of quality in the candidate pool.

In the days of such heroes as Major Malcolm Wheeler-Nicholson (WWI era Cavalry hero, foreign military expert, creator of what became DC Comics), the above behavior was unheard of at a time when America demanded greater accountability from its government leaders. The Major risked it all by exposing corruption in the Army by blowing the whistle in an article he published in the New York Times. He later survived an assassination attempt his family believes was orchestrated by the Army in response to his exposure of its corruption. The Major, a military hero turned journalist and comic book creator, believed that by exposing government corruption and then replacing it with honesty and common sense, that America would remain a beacon of hope for the world. Our current leaders should take note of his example.

However, for over four decades, veterans have been fighting tooth and nail for the benefits they were promised when they took the oath of military service. Disability benefits have long seemed out of reach due to some kind of backlog, endless denials, and an inappropriately adversarial Board of Veterans Appeals. Once disability was granted, the veteran then faces another battle. The veteran then fights for adequate and timely health care to help treat the condition the veteran previously fought to document as a disability.

This disgraceful treatment impacts our recruitment abilities. I will step out on a limb by pointing out that numerous patriotic families now discourage military service due to the dishonesty we see before us in this current VA scandal and similar scandals prior to it. For example, one friend’s grandfather, who was a WWII hero, suffered through numerous failed attempts at getting VA care and benefits and was still picking out Japanese shrapnel up to his death. When Uncle Sam came knocking for boys like his come Vietnam, he refused to allow his children to enlist under threat of moving to Canada. His fears were not only related to the trauma and risk of war, but that his boys would endure the same fight he fought as a disabled veteran.

This veteran is not alone, and through decades of failures, we have subverted our national security by failing to honor our commitments. Many more veteran families from the current wars will have the same reaction, in part, due to America’s dysfunctional and criminal treatment of veterans. Distrusting families like these will include those with children who fall into the “best and brightest” pool I mentioned above. They will not send their children to fight for a country that does not honor its commitments.

The connection here is clear.

An America that does not honor its commitments to its troops after service is an America that does not care about its foreign policy. We need to wake up, hold those criminals accountable who have harmed veterans for so long, and correct this disastrous path we have followed for decades. The safety of our children’s, children’s, children depend on it.