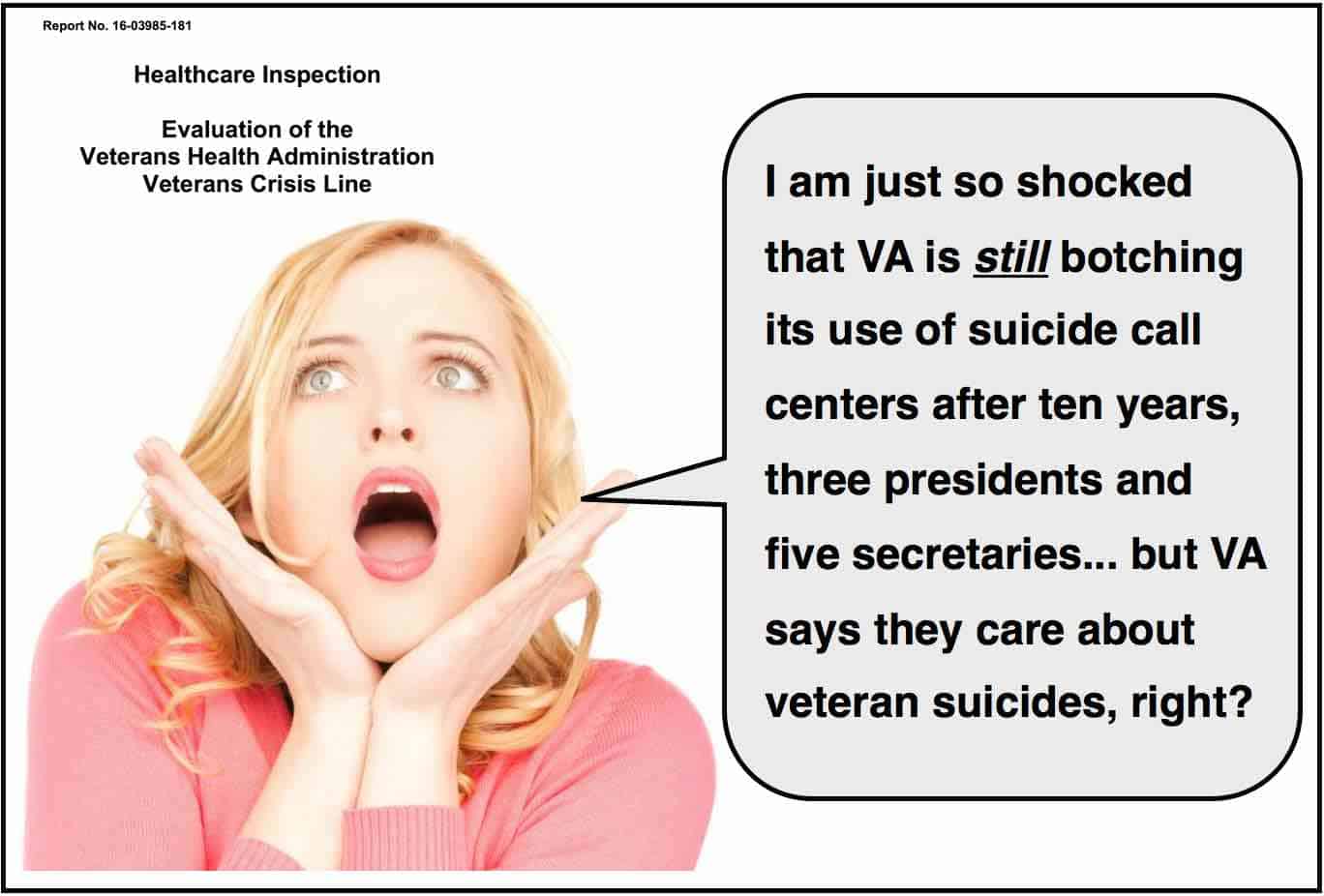 A new audit shows the Veterans Crisis Line failed to implement action plans from a February 2016 IG audit and does not collect post-call suicide data to know if it is working.

A new audit by VA OIG found VA failed to fully staff and repair deficits resulting in at least 1/3 of all calls rolling over to ill-equipped backup call centers. Further, the call centers do not collect post-call data on whether veterans still attempt or complete suicide. And making matters worse, VHA has ignored recommendations it agreed to implement from February 2016 after more than one year.

RELATED: Why Did Veteran’s Call To Veterans Crisis Line Get Routed To India?

According to the IG report:

VCL leaders defined the success of the call center partly in terms of suicide reduction. However, the VCL had no process in place for routinely obtaining or reviewing data on serious outcomes, such as attempted or completed suicides by veterans who made contact with the VCL prior to the event. By not reviewing serious adverse outcomes, VCL QM managers missed opportunities for quality improvement.

How can they measure success without knowing if veterans are being positively impacted or still completing suicide after calling?

How can we keep pumping money into programs that lack the basic metrics necessary to know if the endeavor is even working?

According to the IG report, present deficiencies include:

In addition, let’s not forget the recommendations IG made in February 2016 that VHA agreed to but failed to implement. These were:

We recommended that the OMHO (now VHA Member Services) Executive Director ensure that issues regarding response hold times when callers are routed to backup crisis centers are addressed and that data is collected, analyzed, tracked, and trended on an ongoing basis to identify system issues.

Appropriate VHA leaders did not demonstrate the use of the Link2Health data to improve performance. Although we found evidence that VCL staff reviewed

Link2Health data, we did not find that they used the data systematically to provide feedback to backup centers regarding performance parameters such as queue times, abandonment rate, and call answer rate. At the time of this report, VHA had not completed the necessary actions to close this recommendation.

We recommended that the Member Services Executive Director ensure that orientation and ongoing training for all VCL staff is completed and documented.

We found that VHA did not ensure that orientation and ongoing training for all VCL staff was completed and documented. At the time of this report, VHA had not completed the necessary actions to close this recommendation.

We recommended that the Member Services Executive Director ensure that silent monitoring frequency meets the VCL and American Association of Suicidology requirements and that compliance is monitored.

We found that VHA had not yet ensured that the VCL establish a requirement for silent monitoring frequency of VCL calls and therefore could not have monitored compliance with such a requirement. VHA requested an extension until March 2017, and this recommendation remains open.

We recommended that the Member Services Executive Director establish a formal quality assurance process, as required by VHA, to identify system issues by collecting, analyzing, tracking, and trending data from the VCL routing system and backup centers, and that subsequent actions are implemented and tracked to resolution.

The VCL lacked key components of a formal quality assurance process necessary to comply with VHA requirements. Specifically, the VCL had not designated individuals with appropriate background and skills to provide leadership to promote quality and safety of care. VCL policies did not incorporate relevant existing VHA directives outlining the key elements of a successful QM program. The VCL also lacked a committee that regularly reviewed data, information, or risk intelligence, and that ensured that key quality, safety, and value functions were discussed and integrated into VCL processes. VHA requested a deadline extension of March 2017 to implement this recommendation.

We recommended that the Member Services Executive Director consider the development of a VHA directive or handbook for the VCL.

We recommended that the Member Services Executive Director ensure that contractual arrangements concerning the VCL include specific language regarding training compliance, supervision, comprehensiveness of information provided in contact and disposition emails, and quality assurance tasks.

We found that while VHA established a new contract in April 2016 with a goal of improved quality assurance monitoring, VHA did not ensure compliance with the quality assurance surveillance plan for VCL backup center performance. VHA planned to extend the current contract for 6 months and requested an extension for implementation of this recommendation until September 2017.

We recommended that the Member Services Executive Director consider the development of algorithms or progressive situation-specific stepwise processes to provide guidance in the rescue process.

VHA stated that they were developing standard work processes for all caller types including SSA responsibilities during emergency dispatch. We found that VCL managers developed standard situation-specific progressive stepwise processes to provide guidance in the rescue processes. However, VHA needs to demonstrate the training and competence of SSAs on the current protocol to achieve closure. VHA requested a deadline extension of March 2017 to implement this recommendation.

Which of any of these points concern you the most and why?